With the 3rd Generation iPad now out in the wild, we are starting to see more benchmarks comparing the new iPad to the iPad 2 and other devices.


They found that the extra Quad-Core GPU power found in the new iPad seems to primarily allow the new iPad preserve performance on the new Retina Display rather than providing any significant boost in the experience over previous devices. The new iPad, however, is pushing 4-times the number of pixels as the iPad 2, so you do get a distinct visual improvement, but raw framerates seem to be near identical on the tested benchmarks. Benchmarks, of course, are rather artificial measures of performance, and developers may find other differences between the two devices depending on the circumstance.

Meanwhile, LaptopMag pitted the 3rd Generation iPad against the NVIDIA Tegra 3. Apple specifically claimed that the new iPad's A5X chip had 4x the graphics performance as the Tegra 3. They did find, in at least one graphics benchmark, the iPad 3 did exceed the Tegra 3 by a comparable factor: 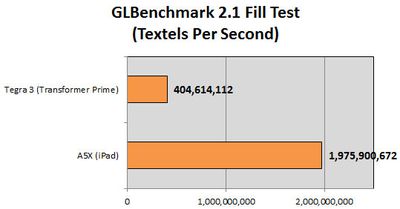 CPU (Processor) speed, however, was a different story. The Tegra 3's Quad-Core CPU did beat out the new iPad's Dual-Core CPU:

Apple specifically boosted the new iPad's graphics processing unit (GPU) from Dual-Core to Quad-Core in the A5X chip, but kept the same Dual-Core central processing unit (CPU) as the previous generation. The unreleased A6 chip is believed to be Apple's next generation Quad-Core CPU which is still in the pipeline.

MRU
People get too bogged down in specifications rather than user experience.

I imagine this thread will do nothing but foster more android and apple fanboy nonsense.
Score: 12 Votes (Like | Disagree)


Transformer Prime. Its Tegra CPU is apparently more Optimized for geekbenching than the A5X.

However, when you look at the article in total, and consider the Retina display and GPU performance, there's clearly More Than Meets The Eye to this article, than simply the numbers. :)

I don't know much about the Transformer Prime sales numbers, but it would seem that Apple can't Roll Out enough iPads!
Score: 9 Votes (Like | Disagree)

i was hoping for a faster processor, but since there is no app or game out there pushing the ipad to its limits i guess apple was thinking that the A5x was still ok.


I think Apple also had to make a compromise when they discovered how much power the new display would need; 70% more battery already with he graphics.

Quad CPU to come later, perhaps when the manufacturing process shrinks down to be come more power efficient.
Score: 9 Votes (Like | Disagree)


Why? Couldn't figure out how to turn them on?
Score: 7 Votes (Like | Disagree)

You're right, I only sold eight of them this Friday. Don't get me wrong $500 profit in one day is nothing to sneeze at but it's nothing compared to 2-3K I'd clear on average release weekend. Apple needs to hurry up with new iPhone so that fanboys can subsidize my next vacation :D