One of the major selling features of the new Verizon iPad Wi-Fi + 4G LTE is its compatibility with GSM networks for international roaming purposes. But what hasn't been clear is whether users could insert an AT&T micro-SIM card into a Verizon iPad and receive data connectivity. Given that the Verizon iPad supports the same GSM frequency bands for non-LTE networks as the version sold for AT&T, it appeared to be technically possible to use a Verizon iPad on AT&T although Apple could have opted to restrict the device's operation on other networks.


As noted by jsnuff1 in our forums, the new Verizon iPad does indeed work on AT&T's network when equipped with an AT&T micro-SIM and the device's carrier settings are updated to support connecting to AT&T.

Big question on everyone's mind buying the Verizon iPad was whether data from AT&Ts 3G network would work on this iPad, or if Verizon/Apple would block this.

I was one of the first to obtain a Verizon iPad and can happily confirm that this is allowed! I used my ATT iPhone 4S sim card and took out the Verizon sim, and data worked! You must apply the AT&T APN carrier settings before this works though.

It is important to note, however, that a Verizon iPad will be limited to non-LTE bands (EDGE, 3G, HSPA+ 4G) on AT&T. The Verizon iPad hardware supports only the 700 MHz band for LTE to match the carrier's technology, while the GSM version sold for use on AT&T's network supports both the 700 MHz and 2100 MHz bands as used by that carrier. 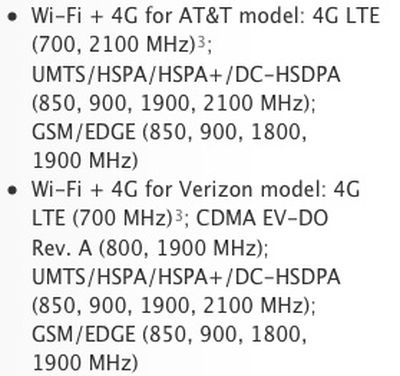 Initial pre-orders of the new iPad are arriving today, while retail outlets in ten countries are offering in-store purchase for those still looking to purchase an iPad on launch day.

Small White Car
So if I have this right...

I can buy a Verizon iPad and when I really need data, just use my AT&T iPhone's SIM card to get some for a few minutes? Basically swapping out a small screen for a big one?

This...really seems too good to be true.
Score: 4 Votes (Like | Disagree)

Sit back and learn, kid.


I know you fell for a troll, but I enjoyed that anyway.

Ah, I remember being excited about getting 1X in my area!
Score: 3 Votes (Like | Disagree)

Sounds like retail to me. LOL ;-) No company has the same people working on the "handset set" and the infrastructure. That's always been the case; they're two entirely different groups, and is what causes so much pain between handsets and network.

And any company that has one role doing all that must be really really small, or just BS. Are you that company that made those little antennae boosters they sold for $0.99 and stuck on your battery and claimed it enhanced your signal, back in the late 90s???


Sit back and learn, kid.

Back in the day - apparently before you were born - there was a company that made high-tech stuff.

Police radios, satellites and satellite phones, cell phones, cell phone network infrastructure, microprocessors (powered the Apple II and the Mac even), cable modems, computers, batteries and car electronics. No, that's not a total list - there's quite a bit more, but this will suffice for now.

And in that company - which most certainly did make both phones and infrastructure (there were 2 others that did - can you name them? Probably not...) - employees could (shock!) move between divisions, either temporarily, or even (horror!) permanently. Hell, the divisions were right across the street from each other.

I have news for you: lots of people went between the divisions. Handsets one year, back to infrastructure the next.

Is this rocket science to you? Or are you just unaware that people may have long careers in big companies with multiple jobs in that company?

I say he's an AT&T employee. LOL. Apple has fanboys drinking their kool-aid right out of the faucet (I might be a little guilty), but there's no such thing as an "AT&T Fanboy" except employees, haha. I know several AT&T employees who use Verizon or Sprint... that says alot since their employee lines are free, hahahaha.

First, if you would have just checked my post history you would know this to not be the case. But hey, that would actually take some work wouldn't it. It's so much easier to just post crap, right?

Secondly, a couple of polos from product launches from that company I supposedly didn't work with for my customers. Note that one is from a pretty long time ago. Yeah, I've been around.


Ahhh... it's Friday, time for the weekend and some fun time with my new iPad (Verizon, natch) that my boss surprised me with as a bonus...

alric
I wonder if the Hotspot function will work on the Verizon iPad with the AT&T SIM.
Score: 3 Votes (Like | Disagree)

Awesome, now you can pay 2 monthly bills for 1 ipad. Brilliant!


Huh? Isn't the point of this to not have to pay Verizon's data fee so you can use your iPhone's data on your iPad?
Score: 3 Votes (Like | Disagree)

Got a fresh iPad SIM from the AT&T store. After I insert it in the Verizon iPad, I get AT&T 4G in the top left as well as signal bars, but when I go to the Cellular Data screen and tap View Account, I get the message "The device type entered is not supported."

It looks like that although there's no technical reason why a Verizon iPad can't use AT&T HSPA+, the servers won't allow you to purchase a data plan. If you activate the plan using other means first, it would probably work, which is why AT&T iPhone users have been able to successfully use their SIMs in the new iPad.

Update: If you try to activate on the AT&T website (https://dcp2.att.com/OEPNDClient/pages/B-00T.jsp) using the IMEI number, you get the same error message, so I have a feeling that AT&T simply rejects the IMEI numbers from Verizon iPads.

Well folks, looks like this really doesn't work ... here is the low-down gathered from various threads:


#1) If you have an ACTIVATED iPhone SIM and put it in the VERIZON (VZW) iPad ATT Data works. However there is no way ATT will let it continue plus it is against their TOS.

#2) If you have an ACTIVATED iPad 2 SIM from your previous iPad (or even from an iPad 3) it will also work in a VZW iPad but you may have to change the APN (easy do do).

#3) If you have a FRESH NEW not yet activated iPad SIM and put it into the VZW iPad you cannot activate the SIM in the iPad or Online.

So basically the VZW iPad software does lock out AT&T SIM cards. Unless you already have an activated ATT SIM you are SOL which kinda kills the deal for most people.

Does anyone have any different TESTED RESULTS?
Score: 2 Votes (Like | Disagree)
Read All Comments

Apple Lets Go of Recruiters as Company Slows Down Hiring