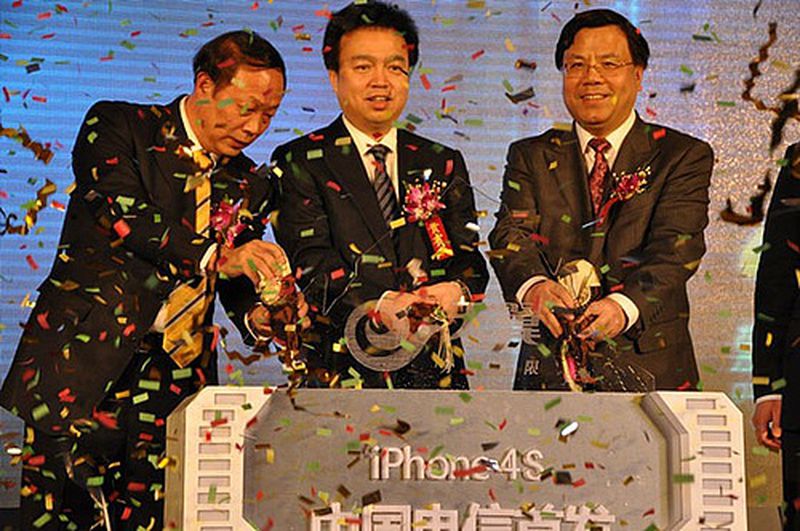 M.I.C. gadget has a roundup of the launch events, with China Telecom having announced a greater-than-expected 200,000 pre-orders for the device.

China Telecom is actually playing Verizon’s iPhone role in China. As far as we know, China Telecom now has close to 130 million subscribers, and the carrier also boasts about having the largest CDMA network in the world by installed base. With over 200,000 pre-orders placed for the iPhone 4S, China Telecom is likely to emerge the victor in a looming iPhone war with China Unicom by offering both better prices and service.

As a CDMA device, the iPhone 4S on China Telecom possesses some of the same limitations seen with the device running on Verizon, including somewhat slower maximum data rates on 3G compared to GSM networks and a lack of support for simultaneous voice and data. China Telecom's iPhone 4S, which ships with iOS 5.1 pre-installed, also requires the use of a micro UIM card. The card is analogous to the micro-SIM card used on GSM devices, although many other CDMA carriers such as Verizon do not use such removable cards and instead rely on subscriber information being stored directly on the device.

Unfortunately most people there can't afford an iPhone.


China is expected to have 600 million people in the middle class by 2015. The current number is somewhere between 150 and 250 million, or maybe even more. There's more than enough people who can afford an iPhone.
Score: 8 Votes (Like | Disagree)

The sentence in bold is totally uncalled for.

Lighten up. In a tolerant society you can make jokes like this without being called a racist (this is not even close for the definition of a racist). That's one of the basics of a democracy. The same goes for jokes about any Gods or religion without being beheaded.
Score: 8 Votes (Like | Disagree)

The photo of the three men is weird

- left: look at this photo of my dog on facebook, isn't it delicious?
- Middle: What the hell did i smoke during lunchbreak
- right: It's raining monaaaaaay


The sentence in bold is totally uncalled for.
Score: 6 Votes (Like | Disagree)

coder12
Who needs champagne when you have confetti! :D
Score: 6 Votes (Like | Disagree)
Read All Comments

Tuesday March 31, 2020 10:22 am PDT by Juli Clover
Apple has acquired weather app Dark Sky, Dark Sky's developers announced today. Dark Sky is one of the most popular weather apps on the App Store, known for its accuracy and storm warnings. Our goal has always been to provide the world with the best weather information possible, to help as many people as we can stay dry and safe, and to do so in a way that respects your privacy. There is no ...
Read Full Article • 198 comments