Apple Shutting Down iWork.com on July 31 Amid Transition to iCloud 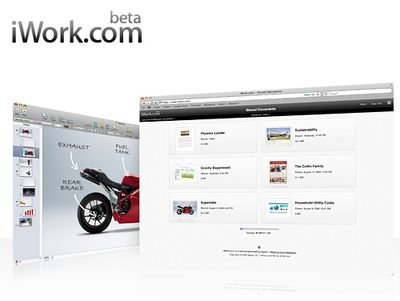 Apple today sent out an email to users registered for its iWork.com beta noting that it will be discontinuing the service as of July 31. The discontinuation comes as Apple places its focus on iCloud, which offers users ways to keep documents in sync among their various iOS devices.

Thanks for participating in the iWork.com public beta.

Last year, we launched iCloud, a service that stores your music, photos, documents, and more and wirelessly pushes them to all your devices. Today, there are already over 40 million documents stored on iCloud by millions of iWork customers. Learn more about iCloud.

iWork.com launched as a free beta in January 2009, with Apple eventually intending to offer the service with tools for collaboration on iWork documents for a fee. The service never exited beta, however, and with iCloud offering new options for moving documents around the company has decided to eliminate the program. But while iCloud does offer a number of new features, it does not offer the level of collaboration tools envisioned for iWork.com.

The elimination of iWork.com will come a month after Apple officially shuts down its MobileMe services. Apple has continued to support MobileMe since the introduction of iCloud last year in order to give users time to move over to the new service. But as of June 30, MobileMe and several of its features such as iDisk, Gallery, and iWeb publishing will no longer be available.

BJB Productions
Anyone else see this coming the day it was launched?
Score: 13 Votes (Like | Disagree)

kendals
Sounds like a new version of iWork is coming

Obviously since you cannot access iWork beta from Pages, Numbers & keynote after July 31st, sounds like an update to remove iWork and add iCloud will FINALLY be coming!
Score: 10 Votes (Like | Disagree)

Radio
Is anyone else still displeased with iCloud?

It's so stripped down and not very functional compared to google and more or less ms office
Score: 9 Votes (Like | Disagree)

Not everyone has Lion.

--------------------
Seriously, my MBA is owned by my employer, who does not want to upgrade to Lion. Despite my telling them that it's an easy upgrade (and I'll pay for it) they don't want the possible headache of incompatible software.

If apple would make iCloud work with Snow Leopard, this would be acceptable. I mean, iCloud works with Vista for crying out loud.
Score: 9 Votes (Like | Disagree)

andiwm2003
well, apple has never been good or consistent with their online services. i would not invest too much time and effort in setting up a professional or even a consumer/semipro workflow with iWork or iCloud. There is simply a too high probability that they change or remove features in two years from now.
Score: 8 Votes (Like | Disagree)

MikeyTree
This would be fine, except that iWork for Mac still doesn't sync with iCloud.
Score: 7 Votes (Like | Disagree)
Read All Comments