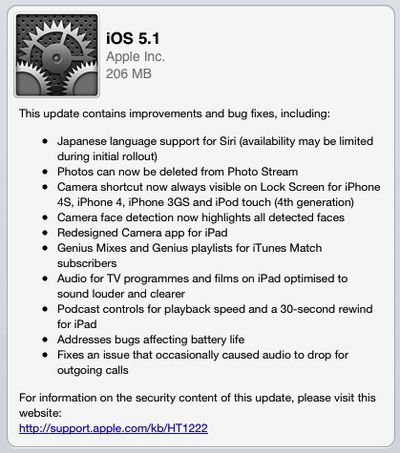 Following Apple's announcement that iOS 5.1 would debut today, the software update is now available for existing iOS devices. Among the notable additions are Japanese language support for Siri, camera enhancements, and the ability to delete photos from users' Photo Streams.

Apple's battery issues under iOS 5 were well-documented, and it appears that the 5.1 release takes additional steps to address that issue, while the update also seems to address audio issues that had been plaguing a number of users.

If idiots could fly, this place would be an airport!

best to wait for the next major one...!


Why would you wait for any update?
Score: 16 Votes (Like | Disagree)

As far as I'm concerned, Siri is nothing more than a marketing gimmick, and is still 90% useless north of the border. The iPhone 4S was released in October, yet its features are still not fully supported.

best to wait for the next major one...!


It now supports "delete" in the photo stream! I say that well worth the update! :confused:
Score: 13 Votes (Like | Disagree)

because there nothing worthwhile updating for...