We've reported a couple of times over the past few days about the imminent opening of Apple's North Carolina data center and rumors that the company is already considering doubling the size of the facility. 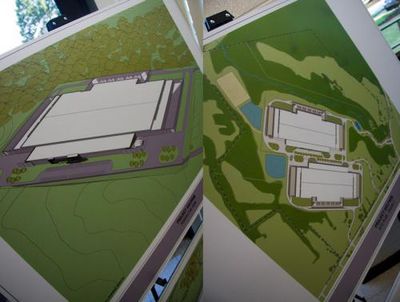 All Things Digital has continued digging into the story and discovered a photo posted to the official Flickr page of Catawba County, North Carolina showing a schematic of the facility containing two buildings instead of the single building that exists today. The image, which dates from July 2009, suggests that Apple has intended to double the size of the existing facility all along, rather than the decision being a recent one.

The discovery also raises the question of the size of the current facility. Public disclosures regarding the facility have always referred to it as a 500,000 square-foot project with a price tag on the order of $1 billion. Consequently, rumors of a doubling of the data center's size assumed that that would bring the facility to a total of one million square feet. It seems possible, however, that the publicized figures in fact referred to the total project with both buildings completed, and thus the current building set to begin operation may only be 250,000 square feet.

Update: One MacRumors reader has performed a rough overlay of Apple's schematic with Google Maps satellite imagery of the area, determining that each building contains a footprint of roughly 500,000 square feet.