One of the significant new features in OS X Mountain Lion is Gatekeeper, a new security system to help keep users from installing nefarious applications on their machines.

The new system relies not only on Mac App Store distribution as means of vetting apps, but also on a new "identified developer" program under which developers distributing their applications outside of the Mac App Store can register with Apple and receive a personalized certificate they can use to sign their applications. Apple can then use that system to track developers and disable their certificates if malicious activity is detected. 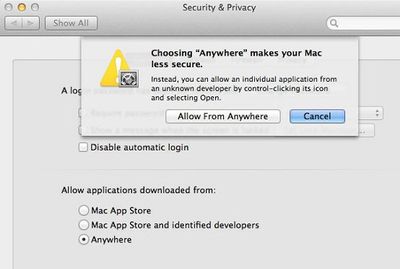 As Macworld notes in its review of Gatekeeper, OS X Mountain Lion's default setting will be to only allow initial launching of apps either downloaded from the Mac App Store or which are digitally signed under Apple's identified developer program. Users will be able to access Gatekeeper's settings in the Security & Privacy section of System Preferences, where they will also be able to choose from an even stricter setting that will allow for installation of Mac App Store apps only or a looser setting that will allow all applications to be installed and launched.

Located in the General tab of the Security & Privacy preference pane is a setting called “Allow applications downloaded from,” with three options:

Anywhere: This choice uses the same set of rules as every previous version of Mac OS X. If an app isn’t known malware and you approve it, it opens.

Mac App Store: When this choice is selected, any apps not downloaded from the Mac App Store will be rejected when you try to launch them.

For users on the default setting, they can bypass the initial Gatekeeper check the first time they launch an unsigned third-party app by right clicking on the app itself and choosing the "Open" command. Once the application has been opened one time, Gatekeeper no longer has any control over it.

Importantly, Apple's identified developer program does not involve any sort of vetting on Apple's part, as certificates are automatically issued upon request and can be freely used by the developers. But what the program does do is provide a way for Apple to link specific developers to specific apps and use Gatekeeper to revoke application functionality should a developer be discovered to be distributing malware.

KingJosh
Why do some people take half the facts and cry?
Score: 32 Votes (Like | Disagree)

Well we all knew this was coming. After Mountain Lion we'll have to jailbreak to run apps from outside the App Store.


No we won't. You just need to turn down the setting to allow all apps.
Score: 22 Votes (Like | Disagree)

ppilone
I knew I shouldn't have looked at this thread... immediately full of "Goodbye OS X" posts.

Gatekeeper really does seem like an intelligent approach to security in OS X. If anything, I think it re-affirms that OS X will not be Mac App Store only for the foreseeable future. Apple is giving developers an opportunity to play nice, without all the headache and restrictions placed on distributing through the Mac App Store.

Why do some people take half the facts and cry?

You may wanna go and check the Gatekeeper developer meaning again.

As much as a geek I am, I am probably gonna run the OS in Mac App Store only Gatekeeper mode and revert to Anywhere when I need to install some stuff on the web.

This is the best Apple can do for the very vast number of users. Caters to us geeks, caters to normal people and caters to those who don't know the **** they are doing.

This is unbelievably awesome.

Well we all knew this was coming. After Mountain Lion we'll have to jailbreak to run apps from outside the App Store.

On the contrary, this is evidence that Apple is NOT going to close the Mac. Things cannot be much more obvious for those who really wish to see without bias and hatred.

Short story for those interested:
Just a couple of days back, one of my friends referred to this concept in general and I was so blown away (shame I couldn't figure out myself). This also prevented Apple from changing the underlying UNIX system to an extent where they would revoke installation permissions from the user or admin or even the super-user. Maybe an additional private kernel model only used for app installations.

This is absolutely surreal. Best ****in feature ever. People don't realise this but this makes me believe that Apple is running for the geeks too. Long live Apple.
Score: 13 Votes (Like | Disagree)

Yes, in Mountain Lion. But I was saying that Apple will silently phase that out in the next release.


I will remain an optimist for now. In some respects, I like the GateKeeper concept. However, if Apple removes (or hides) the "anywhere" feature in 10.9 or higher, I will re-think my OS of choice (but *still* won't consider Windows). When malware can get onto my machine and install like machine-gun fire (this is on a corporate network with "enterprise-level" anti-malware software) when I don't even have admin access myself to install anything, MS will never have my business. I guess I'll revisit (and learn) Linux at that point.
Score: 10 Votes (Like | Disagree)
Read All Comments