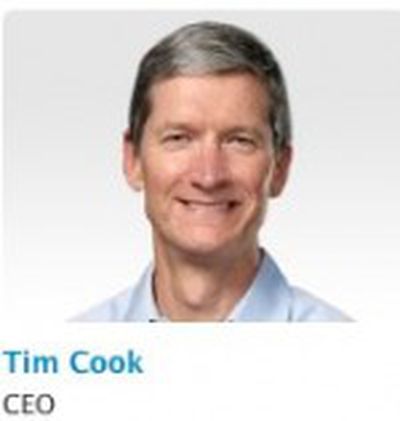 Apple CEO Tim Cook has just completed a Q&A session with analyst Bill Shope at the Goldman Sachs Technology and Internet Conference. While we liveblogged the event with a rough transcript of Cook's comments, here are a few of the highlights:

- Worker safety: Addressing ongoing publicity about working conditions at Apple's suppliers' facilities, Cook reiterated his position that no company is doing more or being more transparent about the issue than Apple. Cook specifically addressed Apple's efforts to address underage labor, safety, and excessive overtime. Apple has also partnered with the Fair Labor Association to conduct what is likely the largest and most extensive audit in manufacturing history. Apple will also be continuing to collect its own data and will be releasing it monthly on the company's website.

- iPhone growth: Dryly noting that Apple's record-smashing sales of 37 million iPhones during the holiday quarter led to "a decent quarter", Cook noted that 90% of mobile phone purchasers and 75% of smartphone purchasers are still choosing something other than an iPhone. Consequently, Apple still has remarkable room to grow.

- Emerging markets: Cook noted that Apple has placed significant energy on emerging markets, with China being the primary focus but Brazil and Russia also receiving attention. While the iPod created a halo for the Mac and other Apple products in developed markets, that didn't work for emerging markets. It took the iPhone to generate that momentum in those countries. In China, Mac grew 100% year-over-year compared with 10% for the broader industry. The Mac growth was from a small base, but still demonstrates significant momentum. Revenue across Apple's emerging markets has grown from $1.4 billion in 2007 to $22 billion in 2011.

- iPad growth: Cook noted that no one could have predicted 55 million units at this point, by far the fastest growth ever for an Apple product. The iPad benefited significantly from an established base of users familiar with the iPhone and iPod and from the established infrastructure of the iTunes Store and App Store.

- Competing tablets: Addressing the Kindle Fire and other cheaper competitors, Cook noted that price is rarely the most important thing for consumers. Long-term, people aren't happy about getting a good deal on a terrible product. Cook noted that he loves competition (as long as other companies "invent their own stuff") and that he believes Apple's innovation will drive things forward.

- Stock buybacks/dividends: Cook noted that Apple is judicious with its cash, and acknowledged that the company currently has much more cash on hand than it needs to run its day-to-day business. He acknowledged that discussions on the topic at board meetings have ramped up as Apple's cash hoard has grown, but asked for patience as Apple considers its options and works to make the best decision for shareholders.

- Apple TV: Cook reported that Apple still considers the Apple TV to be a "hobby", in the sense that it shouldn't be thought of as a major pillar of Apple's business. That said, Apple has always felt that if it kept "pulling the string", there would be something there. Consumer satisfaction is reportedly off the charts and sales are growing quickly.

- Siri and iCloud: Cook's belief is that iCloud is the strategy for the next decade, enabling users to access their content from anywhere. iCloud already has over 100 million users just months after launching. Siri, on the other hand, is a profound change in input methods in Cook's view, and he notes that never before had he considered a beta product to be indispensable.

- Cook's legacy: In a question that seemed to have caught Cook a bit off-guard, Shope asked what Cook believes his stamp on Apple will be and what he will seek to maintain. Cook seemed to very much be speaking from the heart as he focused on the latter portion, outlining the culture of Apple and how important a factor it has been in Apple's success.

The most important is the second part. Apple is this unique culture and unique company. You can't replicate it. I'm not going to witness or permit the slow undoing of it. I believe in it so deeply.

Steve grilled in all of us over many years, the company should revolve around great products. We should stay extremely focused on a few things, rather than try to do so many that we did nothing well. We should only go into markets where we can make a significant contribution to society, not just sell a lot of products. These things, along with keeping excellent as an expectation, these are the things that I focus on.

Cook has participated in this Goldman Sachs event a number of times in the past, but this was his first time as CEO and provided a rare opportunity outside of the company's earning conference calls for him to address questions from those who follow the company from the outside.


Shouldnt you be droning on in an Android forum about how awesome the Samsung Galaxy Skyfire SII 4G LTE Limited Edition Note with commemorative stylus is?
Score: 36 Votes (Like | Disagree)


I doubt you actually believe what you just wrote.
Score: 21 Votes (Like | Disagree)

jdpruitt
I listened to the live broadcast and I gotta say: I really like this guy.

Shouldnt you be droning on in an Android forum about how awesome the Samsung Galaxy Skyfire SII 4G LTE Limited Edition Note with commemorative stylus is?

Not a single mention of a computer :(


He did talk about the ipod effect selling more macs as a result. Talked about the same thing happening with the iPad. He talked about the mac selling very well for 20 some odd strait quarters. So yeah, he did mention computers.
Score: 13 Votes (Like | Disagree)

Apple TV: Cook reported that Apple still considers the Apple TV to be a "hobby", in the sense that it shouldn't be thought of as a major pillar of Apple's business. That said, Apple has always felt that if it kept "pulling the string", there would be something there. Consumer satisfaction is reportedly off the charts and sales are growing quickly.


Up it to 1080i, get your HD library maxed out with everything possible, and win.
If you treat it like a hobby, pulling that string only flushes the toilet.


No one likes you. Not even your mother.
Score: 11 Votes (Like | Disagree)
Read All Comments