As the Mac becomes more popular, the arrival of A-List titles to the platform is beginning to become a more common occurrence. The latest top-shelf game to hit the Mac is Id Software's RAGE, which has gone live both on the Mac App Store [Direct Link] and on publisher Aspyr's GameAgent online store. 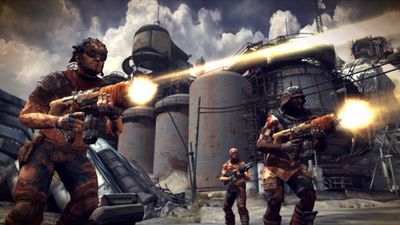 The game takes place more than 100 years after the impact of an asteroid destroys most life on earth. The player awakens after being frozen in cryo-stasis without any memory of who he is or what he is supposed to do. The game plays out in a world similar to Mad Max and the like, with the player fighting enemies, making allies, and trying to find his place in an utterly wrecked planet.

Potential purchasers should note that the game is titled the "Campaign Edition" because it only includes the single player campaign, not the multiplayer components. Priced at $39.99, the well-reviewed post-apocalyptic shoot-em-up has some hefty system requirements, asking for at least OS X 10.7.2 and an Intel Core 2 Duo and a long list of graphics cards -- most significantly, however, integrated video chipsets are not supported.

RAGE: Campaign Edition is $39.99 on the Mac App Store and weighs in at nearly 13GB. Purchasers are strongly encouraged to double check their system requirements before purchasing. [Direct Link]

This game rocks on PS3. I have no idea why people would want to play this game on a computer anymore. Doom, Quake, they were classics, but PC gaming doesn't make any sense to me anymore. Get a console and stop worrying about which video card you have. Perfect refresh rate all the time on a machine made almost 5 years ago...go figure.


because no one in his right mind would play a shooter with a joypad
Score: 5 Votes (Like | Disagree)

PopinFRESH
I really wish game developers would stop tossing their games to ASPYR to wrap in some emulation of DX. Mac OSX has plenty of technologies for a solid native gaming environment, but Apple has yet to really focus on courting game developers to OSX. Apple has really lagged behind updating things like OpenGL, but with Lion they seem to be playing catch up and paving the way for more native games.

Lastly I also agree with several of the users that complain about having to check system requirements. You are using a digital distribution method, one that stems from the iOS AppStore! Yes there are many, many more Mac configurations than iOS devices, however the same ideas should still be functional. My copy of OSX 10.7 should be able to read what apple hardware I am running on. Everything from exactly which GPU, how much graphics memory, how much system memory, how much free HDD space, etc. It should automatically change the "Buy" button to something indicating your system either is completely incompatible; i.e. a core component such as CPU is insufficient, or currently incompatible but due to a resolvable issue; i.e. you need more free HDD space, need more system memory, etc...
Score: 4 Votes (Like | Disagree)

So essentially, they're saying Mac users got short-changed, once again, by only releasing this "campaign edition" that lacks multi-player capabilities, vs. the full-blown one for Windows machines?

I agree it beats having nothing, but that's pretty lame.... It's really only the multi-player features that keep me interested in most 1st. person shooter titles. Without the "human factor" of playing against real, live opponents -- I just get bored pretty quickly. Playing against the computer means you're just memorizing patterns to use which defeat whatever pre-programmed AI is in the game for given scenes. You basically work your way through it, brute-force, with your only real reward being the ability to see what's in the next scene. I got over all of that about 20 years ago with video games. Now, I either want a REALLY good, in-depth world and story-line so it's more like reading a good book when I'm playing, or I want the game to be more of a mechanism allowing a competition between 2 or more other PEOPLE.
Score: 4 Votes (Like | Disagree)

Wouldn't want to play with that, but specs show it IS supported.
Score: 4 Votes (Like | Disagree)

Wouldn't want to play with that, but specs show it IS supported.


i have a mbp with the 3000hd and may try the game and report back... still thinking though.
Score: 3 Votes (Like | Disagree)
Read All Comments