Following up on promises to bring support for major features such as multicam editing and XML compatibility, Apple today announced the launch of Final Cut Pro X v. 10.0.3 with a number of enhancements. The release follows another major update released last September and another minor one released in November. 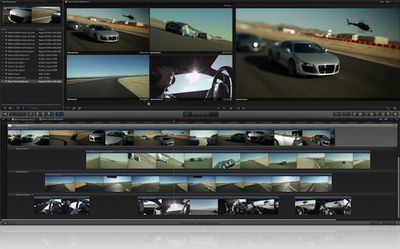 Most of us have already moved on to Avid or Premiere. We can't afford the uncertainty.

They never screwed us over, they just nuked the fridge and forced us to look elsewhere to invest our money in equipment and future roadmaps. We can adapt, but we can't keep using your product when you cut key professional features with no CLEAR roadmap as to when or if we'll get those features back. That being said, I'll play around with this, but my industry has already moved on, so it'll only do me any good on my personal projects.


I work in post and *no one* has moved to MC or Premier. No business person would make such a knee-jerk reaction such as that! FCP 7 didn't somehow stop working when FCPX came out... smh.

Anyone who has been in the business knows that new technology takes time to sort and out and don't jump on bandwagons or off bandwagons because of a product update.

FCPX *clearly* looks like a great way forward in terms of file based media. Add to that the implementation of Thunderbolt devices and you have very powerful platform. With feedback from us pros Apple has proven time and time again that they listen to their customers.
Score: 24 Votes (Like | Disagree)

An example? OK- here's a clip we pumped out last summer in about 4 days. 3 camera shoot, multi format, & a client breathing down our neck. Graphics created in motion, seamlessly integrated into FCPX sequence.


That looks like the same stuff that has been airing on daytime cable tv since 1988 or so. No offense, but I wouldn't hold that up as an example of some sort of achievement. Speaking as an outsider to the industry who did stuff like that for hobby projects more than a decade ago, it's not impressive.
Score: 23 Votes (Like | Disagree)

RoboCop001
My god are people that neurotic?

People's reaction:
OH NO THIS BREAKS MY CURRENT SETUP I HAVE TO SWITCH :eek:

Seriously? It's a code over haul. It may have been released a bit too early, but it takes time to add those legacy features back in. And I have confidence that they will.

As for the legacy features that won't come back, get over it and adapt. Or sure, switch if you really have to. But don't be neurotic.

I work in a post production house and we're still running FCP 6 for crying out loud. And we've never had a problem.

I believe FCP X will be the one everyone wants in the near future. I'm waiting excitedly to see where it goes. For the time being, my setup works perfectly fine.
Score: 18 Votes (Like | Disagree)

I am a editor for NBC and other cable networks and it doesn't matter what I edit with I adapt . I haven't been using FINAL CUT X a lot but I use FINAL CUT 7 with no issues and I also work with premiere and avid . If you are a good editor you can work with most any program so stop the whining and learn how to edit !
Score: 17 Votes (Like | Disagree)

You seem to take it mighty personal yourself whenever anybody here argues another opinion. You got what you want (your Adobe suite) and then some (this new FCPX update) maybe time to lighten up a little? ;)


Actually, I disagree. He has been rather civil, it's others whose comments have been of a personal nature (one person in particular seems to be taking this very immaturely).

Yeah, I don't think so. "Most of us." Most of yourself, perhaps.

I worked in broadcast and produced, directed, and edited live TV. My degree is in broadcast communication. And I still call BS on your "most of us" baloney statement.

Your little sphere constitutes about 0.000000001% of the professionals out there, and until I hear your name attached to the Pulitzer, you are not above anyone else.

Congratulations! I hope Avid also comes with a complimentary weiner-sling which you'll need to carry around all your international broadcast and film credentials, whilst you look down at all the smaller station professionals with the rest of your "most of us" pals.