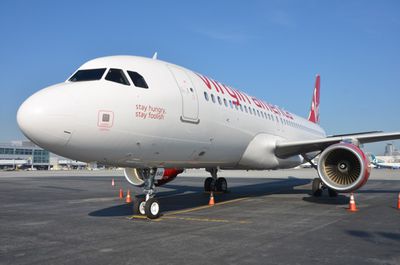 Virgin America has named one of its fleet after Apple co-founder Steve Jobs, emblazoning a popular Jobs quote "Stay Hungry, Stay Foolish" on the side of this Airbus A320.

Steve mentioned the phrase in his 2005 commencement address at Stanford University, noting that it was originally used in The Whole Earth Catalog in the 1970's:

On the back cover of their final issue was a photograph of an early morning country road, the kind you might find yourself hitchhiking on if you were so adventurous. Beneath it were the words: "Stay Hungry. Stay Foolish." It was their farewell message as they signed off. Stay Hungry. Stay Foolish. And I have always wished that for myself. And now, as you graduate to begin anew, I wish that for you.

A Virgin America spokesperson explained to MacRumors that the name was chosen as part of an internal plane naming competition. The plane, with tail number N845VA, first flew last fall.

Virgin America is the only airline based in Silicon Valley, with 2,200 employees based in Burlingame.

eawmp1
So there's no food service on this jet?
Score: 19 Votes (Like | Disagree)

I'm sorry, but this just seems to be a bit too much. Why don't we carve his image into Mount Rushmore, Put his image on our currency, make his birthday a national holiday. Good lord! He was a great sales and marketing guy, it isn't as though he cured diseases, raised the dead and walked on water, for God's sake!

It's not like Washington, Jefferson, Lincoln, Roosevelt (images on Mount Rushmore), Franklin, Hamilton, Grant (people on currency not already listed,) MLKJ, or Columbus (people who have federal holidays named after them,) cured disease, raised the dead, or walked on water, and yet they do have currency marked with their image, or statues of them carved into mountainsides, or had their birthday made into a holiday.

Jobs was a modern Einstein, Edison, or Disney, the kind of guy who love him or not, changed the world. Many looked up to him. He was probably my #1 role model outside my family. I'll probably look for my own little ways of memorializing him throughout my life.

Oh, and FYI, between the (RED) and breast cancer aware-pink products he probably did more to cure disease than many of the people who I listed in my first paragraph (I could be mistaken though... I'm not too terribly familiar with all of their life accomplishments.)
Score: 7 Votes (Like | Disagree)

Isn't the A380 the one that keeps having problems with the connectors cracking that hold its wings on? Yeah, that could become a huge embarrassment if IT had a tribute to Jobs on it and then had a structural failure due to design flaws.

It's not technically the "connectors" that hold the wings on, it's L-brackets that join the wing surface to the rips.

ArtOfWarfare
I'm not sure I would say this is named after Steve Jobs... it's not even his quote originally.
Score: 5 Votes (Like | Disagree)

Wednesday November 30, 2022 2:39 am PST by Sami Fathi
Geekbench scores allegedly for the upcoming "M2 Max" chip have surfaced online, offering a closer look at the performance levels and specific details of the forthcoming Apple silicon processor. The Geekbench results, first spotted on Twitter, are for a Mac configuration of with the M2 Max chip, a 12-core CPU, and 96GB of memory. The Mac listed has an identifier "Mac14,6," which could be...
Read Full Article • 225 comments