Pocket-lint reports that Utah company HzO, which was showing off its "WaterBlock" technology for providing water resistance to mobile devices at last week's CES, has said it is talking to Apple about the possibility of including the technology in future iPhones and other devices. Samsung is also reportedly "excited" by the technology.

"We showed the Samsung Chairman the technology with a Samsung Galaxy S that we had coated with HZO and he couldn't believe his eyes," a representative of the company told us. "Samsung is really excited by the tech."

The company has told us that they are also talking to Apple as well, hoping to be able to let Apple make the iPhone 5 waterproof.

"We expect HZO to be in next season's phones," HZO told Pocket-lint rather confidently.

The WaterBlock technology, which consists of a coating applied to interior device components to help them resist water damage, is performed during the manufacturing process and is invisible to the user. 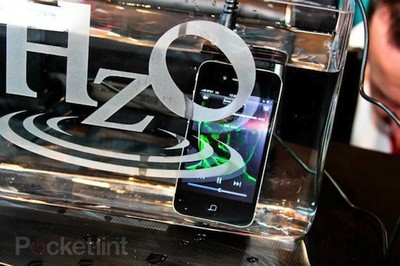 It is difficult to know how serious the company's discussions with Apple are, and any substantial conversations would almost certainly be subject to non-disclosure arrangements. In addition, expo floor exhibitors are of course primarily interested in promoting their products, and any mention of discussions of partnerships with major companies is a good way to generate publicity.


Consequently, it is impossible to put any measure of weight on speculation that Apple might adopt HzO technology, but it does appear to be an interesting possibility for mobile device manufacturers seeking to improve the durability of their products.
[ 142 comments ]

TimUSCA
This is an example of a company that would make sense for Apple to just outright buy. The iPhone being waterproof would be a *major* selling point.
Score: 69 Votes (Like | Disagree)

nikhsub1
For those of you that think this is so 'revolutionary' you need to just google conformal coatings. This has been done for years, and is nothing new, exciting or groundbreaking at this point. I have been water cooling computers for almost 15 years now and have used conformal coatings you can spray out of a can that work just as the video with the iphone. I LOL'd at "these guys just hit the lottery" :D Trust me, Apple has known about conformal coatings forever, they are not stupid and like I said it is nothing new. There are potential downsides, one is that it can help to retain heat...
Score: 29 Votes (Like | Disagree)

Primejimbo
This is a great idea, BUT I can see the posts "I can't replace my iPhone battery without damaging the waterproofing coating &*%!@ APPLE!!!"
Score: 19 Votes (Like | Disagree)

"We expect HZO to be in next season's phones," HZO told...

I think this means there is almost no chance Hz0 will have anything to do with the iPhone 5.

Apple's partners keep their mouths shut. HzO surely knows this. So this sounds like a desperate ploy to get attention from other manufacturers.
Score: 19 Votes (Like | Disagree)

DavidLeblond
Can I get just enough to apply to the moisture detection strip of my iPhone?
Score: 16 Votes (Like | Disagree)

Apple's partners keep their mouths shut. HzO surely knows this. So this sounds like a desperate ploy to get attention from other manufacturers.

What exactly makes this "desperate" rather than just a normal ploy?
Score: 13 Votes (Like | Disagree)
Read All Comments