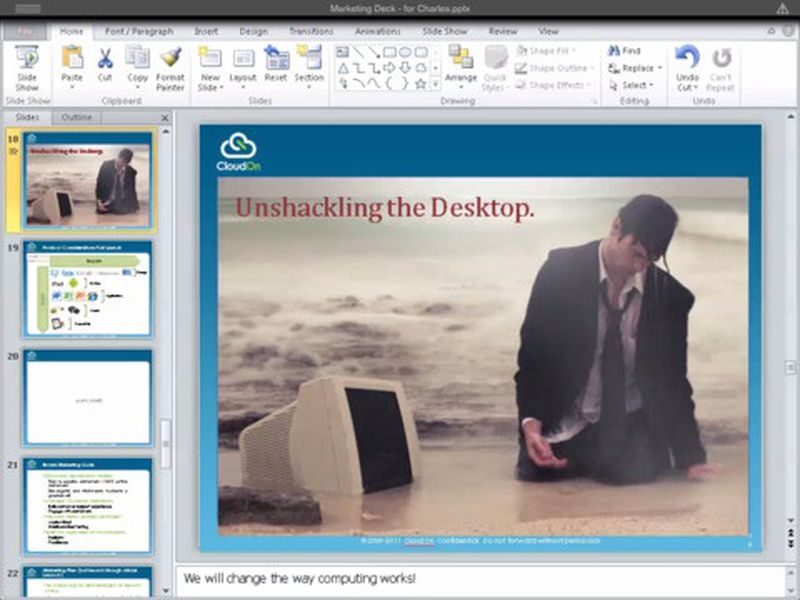 Silicon Valley startup CloudOn today released a free iPad app [App Store] that aims to bring the functionality of Microsoft Office to the iPad. The iPad app actually serves as an interface for the full cloud-based app on CloudOn's servers, and thus requires an Internet connection to function, but offers what seems to be a remarkably functional implementation of Microsoft Word, Excel, and PowerPoint, all integrated with file storage and syncing through Dropbox.

CloudOn’s WorkSpace allows you to:

-Use Microsoft Word, Excel and PowerPoint on your iPad to create or edit documents.
-Rename, delete and manage documents with your Dropbox account
-Display, edit or create charts, change formatting, spell check, insert comments, into any Word, Excel or PowerPoint files
-Track changes while reviewing Word documents
-Use pivot tables and insert formulas in Excel workbooks
-Display and edit animation or transitions in PowerPoint presentations
-Present in full PowerPoint mode (not in PDF)
-Open files directly from your iPad email accounts or Dropbox account
-Automatically save documents to avoid losing changes

In our limited testing, the app appears to function as advertised, offering the Office-style ribbon toolbars with a significant number of features and tools included. Given the constraints of operating on an iPad and via a cloud-based interface, however, there are some limitations such as an inability to insert outside images into a document via the interface. The app is also currently U.S.-only. 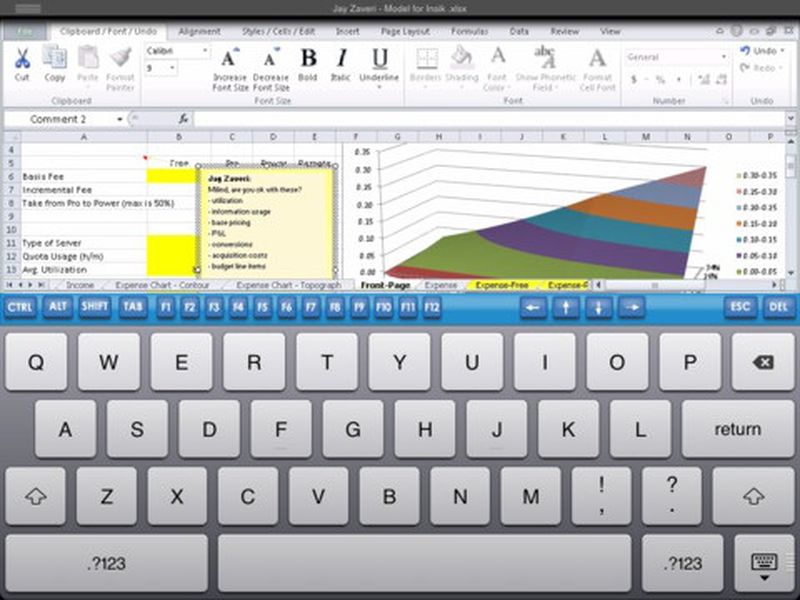 The CloudOn company itself is a bit of a mystery, with little in the way of publicity or web presence. Founded in 2009 as AppToU by several former Cisco employees, the company has attracted several rounds of financing as it has quietly built its cloud-based tool for delivering Office functionality to the iPad.

Microsoft has acknowledged at least exploring the possibility of bringing Office to the iPad, and recent rumors have suggested that the company is "actively working" on Office for iPad.

Update: The CloudOn app is currently "sold out", likely due to high levels of interest from users.

That Ribbon mess. Now available in the cloud.


Ribbon mess? Have you ever seen the inspector of the iWork applications?
Rating: 11 Votes

LOL. Steve would be turning over in his grave. F1, F2 buttons on the toolbar: LOL!!! It's been a while since I saw anything that dumb!


Considering it's the desktop version of Office running on your iPad, you kinda need those function keys.

So how is that dumb?
Rating: 10 Votes

pewra
So it's a VNC client?

Sort of muddying the already unpalatable waters of the term "cloud".
Rating: 8 Votes

The application is still running in the cloud.


You mean a server.
Lets get real here, 'cloud' is just a buzzword for servers.
Nothing more than what they had in the 60s/70s/80s with thin client terminal computing.
Rating: 7 Votes

That Ribbon mess. Now available in the cloud.


But if you bought the same thing from the App Store it would be great, right?
Rating: 6 Votes

how is it even legal?


It's perfectly legal if it is running a licensed version of office on the cloud. The question is, how does CloudOn pay for that licensing when they aren't charging the customer anything, and it doesn't even seem like they are doing any advertising?

So it's a VNC client?

Sort of muddying the already unpalatable waters of the term "cloud".


Yes and no. A VNC client typically shows a user's entire desktop, but this is just showing one application, so it's more Citrix/XenApp like than VNC. But the idea is correct.

Still, it is very much a correct usage of the term "cloud". The idea of the cloud is the application is running on-demand out on a server somewhere that is typically spawned on-demand, to fit in the "pay as you go" model. It doesn't really matter if the client interface is VNC, webpage, or whatever. The application is still running in the cloud.
Rating: 6 Votes

cakebake
how is it even legal?
Rating: 6 Votes

Ribbon mess? Have you ever seen the inspector of the iWork applications?


That was priceless. As much as people hate the Ribbon, I must say that you are indeed correct that the inspector takes the cake in UI kludge.
Rating: 5 Votes

Phil A.
It's currently US Only (something that should be mentioned in the article)
Apart from that, it's a terrible app and I can't imagine using it in preference to Pages (which is how tablet word processors should be done.
Rating: 5 Votes