While it seems obvious that the holiday gift-giving season is a strong driver for iOS device sales, as evidenced in part by past history and Apple's forecast of a blockbuster quarter, it is generally difficult to quantify that holiday boost before Apple reports device sales as part of its quarterly earnings or makes public statements about App Store milestones.

A couple of analytics firms have, however, put out reports today seeking to offer some measure of the bump in demand for iOS devices and those of competing platforms such as Android.

According to Flurry, both iOS and Android saw a "massive influx" of devices registering on the firm's servers, coming in through the over 140,000 apps using Flurry Analytics. Data collated by Flurry shows that combined new device activations for iOS and Android rose from an average of 1.5 million per day during the first three weeks of December to 6.8 million devices on Christmas Day, an increase of 353%. This compares to a total of 2.8 million new devices detected on the previous record-setting day of Christmas 2010. 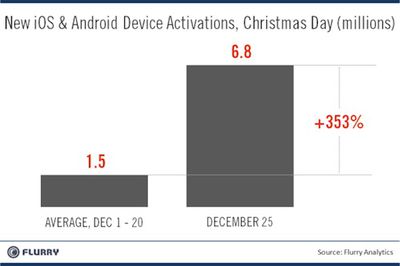 All of those new device activations also drove increased App Store activity, with Flurry measuring an increase of 125% in iOS and Android app downloads on Christmas Day compared to the early December baseline. Flurry's data shows that the 242 million app downloads on Christmas Day spiked from an average of 108 million per day during the first three weeks of the month. Flurry notes that the increase in app downloads is smaller than that for new device activations on a percentage basis due to the higher baseline from apps being installed onto the already-large installed base of devices.

Illustrating how different analytics firms can see somewhat different patterns due in part to what data is used for baseline purposes, Localytics issued a report showing iOS device activations coming in more than 12 times higher during the holiday weekend than they did during previous weekends. The increase was over 15x for iOS devices as a whole in the United States, with the iPod performing strongly at a 21x increase due to the relative lower cost and lack of service contract, factors which make them relatively more popular as gifts than iPhones or iPads.

Comparing iOS to Android, Localytics found that Android also grew at approximately 12.5x over baseline. Localytics also looked at country-by-country comparisons, showing iOS outpacing Android in terms of growth in the United States, Germany, and the UK, while Android performed better in most of the other top countries.

Showing Android as a single column hides the terrible fragmentation that actually exists on the Android platform.


What has to do "terrible fragmentation" with total sales?
Score: 15 Votes (Like | Disagree)

Why is Android always shown as a single unit compared to iPhone, iPad and iPod Touch IOS devices. Certainly each manufacturer's unique version of Android installed on unique equipment is a different device. There should be multiple segments in the Android column for each manufacturer with it's customized Android software just like the IOS column shows the different IOS devices. Showing Android as a single column hides the terrible fragmentation that actually exists on the Android platform.

If you want to talk about fragmentation of the graph, let's discuss how it's fair to compare Android devices, which for the most part are contract cell phones, to iPod touch sales. If you remove the iPod touch from the graph, Android and iPhone/iPad growth are relatively similar.

EDIT: If you remove the iPod touch, the growth rate for the iPhone/iPad is just over 12x, as opposed to Android's mid-11x level (based on US numbers). Not that I am assuming ALL Android sales are on contract, but compared to the iPod touch, it's unfair.
Score: 14 Votes (Like | Disagree)

Shasterball
Does it take into account the fact that there will be a decrease in activations during December 1-20 as compared to your "average" 3 week period because of people holding off until Christmas? I would suspect you would see the same decrease in activations before a product release. Sounds like this would skew the numbers
Score: 11 Votes (Like | Disagree)

Why is Android always shown as a single unit compared to iPhone, iPad and iPod Touch IOS devices. Certainly each manufacturer's unique version of Android installed on unique equipment is a different device. There should be multiple segments in the Android column for each manufacturer with it's customized Android software just like the IOS column shows the different IOS devices. Showing Android as a single column hides the terrible fragmentation that actually exists on the Android platform.

Why do you care so much? Btw, this has nothing to do with fragmentation?

Gratz to all manufacturers, the CEOs will touch a great end of year bonus!
Score: 9 Votes (Like | Disagree)

Why is Android always shown as a single unit compared to iPhone, iPad and iPod Touch IOS devices.


Not enough info to accurately break out tablets from phones.

There should be multiple segments in the Android column for each manufacturer with it's (sic) customized Android software just like the IOS column shows the different IOS devices.


We also never see the iOS phone column separated into 3GS, 4 and 4S sections. They have different screen resolutions and capabilities.

Showing Android as a single column hides the terrible fragmentation that actually exists on the Android platform.


You mean the amazing selection that exists :)

Both Android and iOS have multiple screen sizes and resolutions.

Both have multiple OS versions in use. Just looking at new device sales doesn't speak to that issue. For example, less than half of iOS devices in use are running iOS version 5; the majority are still on 4.x, with a few still on 3.x.

However, from a experienced developer standpoint, the so-called "terrible fragmentation" on both devices isn't that big a deal. It's also not that big a deal to users, since smart developers target the lowest setup possible in order to have as wide an audience as possible.
Score: 7 Votes (Like | Disagree)

Just what I wanted to say... Lies, damn lies and statistics, too many 'news' articles are generated from them...


How is this a lie? This news is only to show how successful they both were...
Score: 7 Votes (Like | Disagree)
Read All Comments