Engadget points to a growing thread in Apple's discussion forums documenting an issue in which users on pre-iOS 4 devices are unable to purchase or download apps from the App Store on their devices. The issue appears to have started on December 16th with a change in the way Apple is serving App Store content to the devices.

Whenever I go into a specific app in the app store, none of the buttons work properly.

1) clicking on the price no longer downloads the app,
2) the ratings button does nothing,
3) the 'tell a friend' and 'git this app' buttons jump back to the top of the app window,
4) pictures usually don't show up. They usually appear as five gray rectangular boxes with white borders (though in one app one too-large-for-the-window picture shows up (see pic),
5) the 'app support' button still goes to the developer's website.
6) the 'top in-app purchases' banner is just text now.

Users are reportedly having difficulty convincing Apple support staff that the issue on Apple's end, with support staff so far only suggesting a range of potential solutions that could help address device issues but which have proven unsuccessful for affected users. 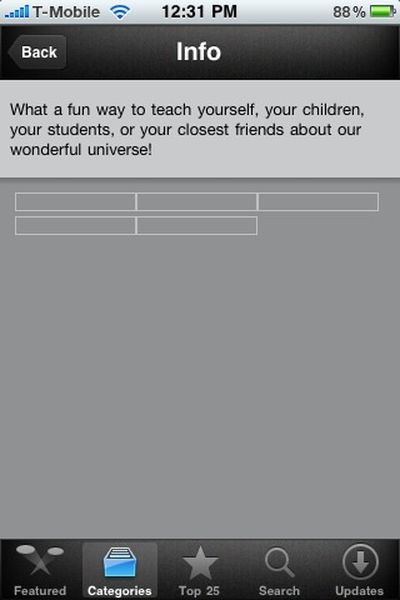 Broken App Store display on iPhone running iOS 3.1.3
Given the display anomalies experienced by affected users, it seems likely that the issue is a bug on Apple's end rather than any sort of planned obsolescence of pre-iOS 4 operating systems and devices by cutting off App Store access. For the time being, affected users can still download apps via iTunes on their computers and then sync them to their devices. It is unknown when Apple might roll out a fix for the on-device App Store access problems.

Update: Engadget now reports that the issue has been fixed. Readers in our forums have been reporting mixed results over the past few hours, with some seeing improvement while others were still having difficulty fairly recently.

Stuck on iOS 3 and can, sadly, confirm this. It is worth noting that updating apps individually via the "Update" button in the update description does not work and has not for a very long time (possibly a year).
Score: 9 Votes (Like | Disagree)

3.13 is ancient, 2 generations old now, and honestly I think it's well within the realm of acceptibility for Apple to disable new downloads. I mean, the vast majority of new apps require at least iOS4 anyway. If this needs to happen to make the appstore more efficient for everyone and enable new features, this is fine. Sure, some people will be pissed, but I think it's a very small minority of ACTIVE iPhone users who are still stuck on iOS3.

Anyone with an iPhone 2G or the first iPod Touch is stuck at 3.1.3 which is only a two years old version of the OS. Not everyone needs to upgrade to greatest and latest every year. Many of the apps like facebook and weather bug and many games still work under 3.1.3.

My iPhone 2G is actually more stable than my iPhone 4S and I only have to charge my 2G every couple of days. Unlike my 4S which needs to be constantly plugged in.
Score: 7 Votes (Like | Disagree)

Note the textured navigation bar and tab bar - this is obviously a bug but the interface elements are there by design. It's possible that they in the process of revamping the UI in the app and for whatever reason an unfinished version has propagated onto pre-iOS4 versions.


That is what I was thinking, it looks like they are revamping the App Store UI, and if that is how the navigation and tab bar are supposed to look then I like it. The nav and tab bar look too polished to be a bug.

Maybe, like you said, a pre-release version ended up on pre-iOS 4 App Store servers.

Thanks for posting a problem that I have been having for months now. I contact Apple but they just tell me to restore my iPhone 4 that fixes it but a few days later problem is back


And neither of you are using iOS 3 so it would not have an affect on you.
Score: 7 Votes (Like | Disagree)

DavidLeblond
The bigger story here is it looks like they're about to redo the look/feel of the App Store app.
Score: 6 Votes (Like | Disagree)

johnnyjibbs
Note the textured navigation bar and tab bar - this is obviously a bug but the interface elements are there by design. It's possible that they in the process of revamping the UI in the app and for whatever reason an unfinished version has propagated onto pre-iOS4 versions.

3.13 is ancient, 2 generations old now, and honestly I think it's well within the realm of acceptibility for Apple to disable new downloads. I mean, the vast majority of new apps require at least iOS4 anyway. If this needs to happen to make the appstore more efficient for everyone and enable new features, this is fine. Sure, some people will be pissed, but I think it's a very small minority of ACTIVE iPhone users who are still stuck on iOS3.

I just love the attitudes of people that aren't affected by things in this world. It's basically, "I'm not screwed so screw you" and comes out of "As long as I've got mine." This is the reason society in general is so screwed up. People don't care about other people's plights and this makes it that much easier to do things like send someone's job overseas. "It's just business." :rolleyes:

I own a current generation iPod Touch that's not affected, but that certainly doesn't make my 1st gen iPod touch useless. I still use it everyday to play music at work and puzzle games on brakes, etc. and swap it with the new one when the battery is low and use either one to control my whole house audio/video system with the "Remote" app and when it's home I also surf the net during commercials some times to look things up, etc. It's hardly "ancient" and it still works fine.

Breaking it just to force me to get rid of it is stupid. I wouldn't buy another one. I'd just go back to using just one iPod Touch. So all Apple would accomplish is to make my life less convenient, except the next time I go to buy such a device I'll think twice about buying one by Apple since I'll remember how they tried to FORCE me to buy something newer. Never underestimate consumer resentment. Apple could find themselves right back in 1998 in a few years if their head gets too big and they start acting like the very companies they once sought to compete against as a cooler alternative. Nothing is less cool than acting like a fascist.
Score: 4 Votes (Like | Disagree)
Read All Comments