In addition, Brazil appears to have gained the notable distinction of being the first country outside of the United States to offer iTunes Match. We received one report over the weekend from a user in the Netherlands who was able to activate iTunes Match, but that functionality appears to have been a very short-lived glitch. 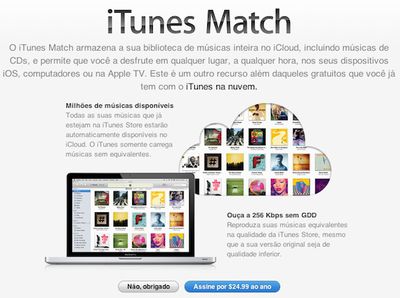 iTunes Match subscription page in Brazilian iTunes Store
MacMagazine.com.br has a running commentary [Google translation] documenting the situation as the various components of iTunes music and movie purchases and iTunes Match are going live in Brazil.

As had been rumored for the Brazilian iTunes Store, prices are currently in U.S. dollars, requiring users to fund their accounts with international credit cards. Pricing in local currencies for the Latin American countries is said to be coming at some point in the future, perhaps within six months.

Launching with a catalog of over 20 million songs, the iTunes Store in Brazil features local artists including Ivete Sangalo, Marisa Monte and the digital debut of Roberto Carlos’ catalog, available to purchase and download along with a wide range of international artists including the Beatles, Rihanna, Coldplay and thousands more. With most songs priced at 99 cents and most albums at $9.99, the iTunes Store in Brazil is the best way for iPad, iPhone, iPod, Mac and PC users to legally discover, purchase and download music online.

I don't understand why it can't launch in every country at once. It is just software stuff...


licensing and the inability of the music industry to embrace innovation.
Score: 9 Votes (Like | Disagree)

What, no love for Canada?

I am really looking forward to iTunes Match if/when it ever arrives.
Score: 6 Votes (Like | Disagree)

psalazarc
Woah, I'm astonished... :eek:
I just can't believe the iTunes Music Store launched in Chile. I know it may not look like a big deal to many, but it is for me. Finally, for Jobs sake. It seems like Apple is finally taking Latin America seriously. Or beginning to. :apple:

Schmitty11
Very interesting choice. I would've bet Canada or some part of Europe would be first.
Score: 4 Votes (Like | Disagree)

X5-452
Interesting choice. I wonder what factors influenced the decision to allow Brazil access to the iTunes Match program over other countries.
Score: 4 Votes (Like | Disagree)

I don't understand why it can't launch in every country at once. It is just software stuff...

Yes, that's a point people have been trying to make for decades now. DVD region encoding and game console staggered launches being two glaring examples. It's called "the RIAA/MPAA doesn't know how to admit they're Dinosaurs and still think a location-limited business model is sustainable in a world where you can get FedEx to bring you something from anywhere in the world in two days."