The OS X version of Sparrow, a popular alternative mail application, has been updated to version 1.5. The update brings bug fixes and 3 new features:

- Dropbox integration. Drag, drop, send (and sync). Sending a mail with attachment has never been simpler.
- Improved search with tokens and suggestions.
- Remote image blocking for a better Spam control. 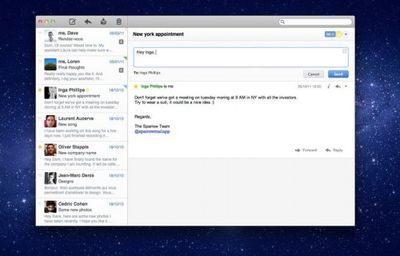 MacStories writes of the update:

New to Sparrow is Dropbox integration, which uploads large attachments to Dropbox as an alternative to CloudApp. If you’d prefer to use Dropbox over CloudApp (or haven’t yet connected to one of these optional services), you can visit the Services tab in the preferences to choose your option. You’ll have to log out of CloudApp first if you plan on using Dropbox (you have to restart the app to see the new login buttons). If you upload an attachment that’s bigger than 25 megabytes in size, Sparrow will choose Dropbox as the alternative host for the attachment and continue to send your message.

Sparrow is available in two flavors, a free, ad-supported version, and a $9.99 fully-featured version.

achtung!
sparrow is beautiful, is clean and it's fast! sure it's doesn't have all the bells and whistles like outlook or entourage, but for me it's just perfect. since lion, the apple mail is too confusing while handling multiple accounts. i have 4 mail accounts simultaneously on Sparrow and its just works. i haven't had any trouble with configurations or compatibilities. they have a solid costumer support and Facebook staff, so you can post doubts and expect replies and tips from their teams really quick. i've tested a lot mail apps before buying Sparrow, and it was love at the first sight. do yourself a favor and grab a copy of Sparrow,and be prepare for the iPhone version too! ;) cheers
Score: 4 Votes (Like | Disagree)

Floris
I want mail to be one solution. Regardless what device or computer I am on.
Gmail has provided this in the past, by simply allowing me to add an account to any mail client, secured imap, or access via any browser.

Sparrow is a great mail app replacement, but not yet on every device.

While looks are nice, they're certainly not everything, nor the solution in my opinion.

[edit] - Tweeted Co-founder of Sparrow and got some positive news from him:

I've had a mac for about 3 years but only started using the stock Mail.app about a year ago and I like it. How is Sparrow better?

I used Mail ever since I switched to a Mac. I just love the simple and elegant look, it is much more convenient than any web app. However, since Lion I actually hate it a lot. The long-awaited third column is glitchy and cannot be properly customised. The conversation view does not work with most e-mail providers including, to my astonishment, Gmail, whereas the much more useful ‘view by thread’ function is gone. Furthermore, the ‘simplified’ e-mail header is an impairment; it shows not enough in compact mode and too much in extended mode, while the save-attachment button is only viewable in the extended mode. For me, Mail for Lion feels like an unfinished product and I would love to get the old version back.

I think that Sparrow becomes more and more a solid alternative to Mail. It has some refreshing ideas, like the Facebook and Dropbox integration which seem very useful to me. The interface is much cleaner and the overall structure of the program is much more simple. However, I cannot use it as it does not properly support my university and work e-mail accounts. It works well with iCloud, Gmail and Yahoo, but not very well with other accounts. Also, I think Sparrow offers not enough customisation options, e.g. to remove the pictures in the mail list and to view all your folders at once, not only the folders per account (at least the last time I used it).
Score: 3 Votes (Like | Disagree)

#1 - This is about the Mac app, not the iOS app, which already has push.

#2 - The current iOS version doesn't have push, so why would you quit using it when they go to a subscription push (which you can choose to opt out of)?


On the IOS tangent -- if you jailbreak, you can download Sparrow Push or Sparrow + and it enables push for Sparrow. I hope Sparrow doesn't close-off that functionality when they launch their subscription service.
Score: 2 Votes (Like | Disagree)

I must have been left behind when this 'popular' mail application was announced. I've never heard of it. Cant beat a good Safari window with gmail.com loaded inside it ;)


Oh, but you can. IIRC, Sparrow was made FOR Gmail; it's their specialty. Give the free version a look; I bought the app, and LOVE it. I have 5 gmail (and Google Apps) accounts and Sparrow works wonderfully with them.
Score: 2 Votes (Like | Disagree)

I've had a mac for about 3 years but only started using the stock Mail.app about a year ago and I like it. How is Sparrow better?


I don't think it's fair to say whether or not it's "better" than another mail app, per se; it's just particularly geared forthough not exclusive toGmail users. A few features especially worthy to note are:

Perhaps development of Lion's Mail.app had been progressing for a while when Sparrow burst onto the scene, but for the uninitiated, many might claim that Lion's Mail stole most (all?) of its key features from Sparrow. In short, it's a rather top-notch program with incredibly helpful and consistent customer support, as well as solid and frequent feature updates.
Score: 2 Votes (Like | Disagree)
Read All Comments