Friday December 2, 2011 12:43 pm PST by Eric Slivka
TechCrunch notes that Apple has removed online dating service Match.com's iOS app from the App Store over violations of the company's in-app subscription requirements. The Match.com app had allowed users to sign up for subscriptions to the service through an external link in the app, a mechanism that is no longer permitted by Apple as it has sought to drive usage of its in-app subscription services that sees Apple taking a 30% cut of revenues.

Apple has removed Match.com‘s iOS app because it allowed the lonely to pay for Match subscriptions with a credit card through an external link rather than using the in-app purchases system. That meant Apple wasn’t getting its 30% cut. In June Apple revised its policy to state that “Apps can read or play approved content that is subscribed to or purchased outside of the app, as long as there is no button or external link in the app to purchase the approved content.” Apple and Match.com are now negotiating how the app must change before their relationship can be rekindled and they can have an earth-shattering makeup revenue split.

Match.com can satisfy Apple's requirements either by offering an in-app option via Apple, which would result in Apple taking its 30% cut, or by simply omitting any links to external payment mechanisms. Under the latter scenario, users would have to know to visit the full Match.com site to sign up for a subscription, an extra step for users which may reduce the number of new subscribers but one that would enable Match.com to avoid having Apple skim off 30% of subscription revenue from the app. 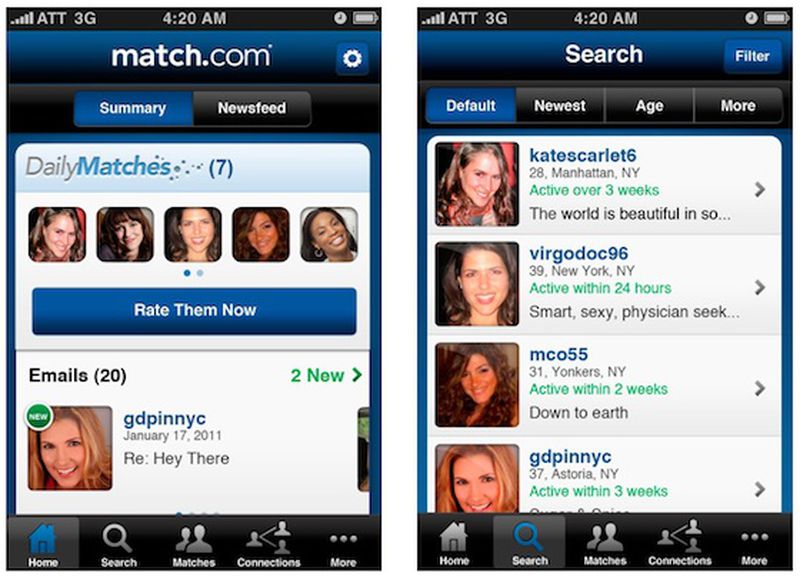 Apple had originally announced that the new in-app subscription requirements would go into effect on June 30th, but the company offered a grace period as it worked with some developers to help them meet the guidelines. Some developers and content providers such as the Financial Times ultimately decided not to adopt Apple's guidelines, and Apple has in those cases removed the apps from the App Store.

It is unclear why it took Apple five months from the official start of the new guideline enforcement to take the Match.com app down. The app was originally introduced back in March 2009 and had been receiving regular updates, but the most recent one had appeared in early June ahead of Apple's new policy implementation. Match.com may simply have been avoiding submitting any updates or investing further in the app while it either discussed options with Apple or hoped to remain under Apple's radar, but it seems that Apple has decided that the best way to encourage compliance was to remove the app for the time being.


Why? in-app purchases give you the ability to enable extra features in an app without having to blindly buy all the features. It's giving you choice.

As for Apple taking a cut of the transactions that makes sense. They've cultivated the app stores and have millions of users with Apple ID backed via credit cards. Why would they let companies come to the table ..get free marketing and cut them out of the process.

The choice is rather simply. Gain access to millions of customers who are proven to spend on technology for a 30% fee or take your business elsewhere.


In App purchases is a rip off to the dev.
If you read the requirements the devs are required to support everything for uploading the new content to the iOS device or have it built in enabled in the app.

30% is way out of line for nothing more than a bad payment processor. Credit cards take 2-3%. So Apple charging 5% would be much more reasonable rate for what serve they are offering.

If Apple allowed you to use outside payment collection then it would be fine. They would then at least provide options but the current system is pretty much a Apple being like the Mob demanding a huge cut for "protection"
Rating: 6 Votes

How is Netflix allowed then, since that is subscription based?


they aren't you can only use the netflix app if you already have an account.
Rating: 6 Votes

TXAppleUser
If it were eHarmony this video would a lot more relevant and funny:

If it were eHarmony this video would a lot more relevant and funny:

Lordskelic
I still think this whole in-app purchasing thing is a raw deal and frankly, it sucks.
Rating: 5 Votes

samcraig
Netflix doesn't allow you to subscribe IN APP.

And I am sure it took 5 months for Apple to realize the "breach" because there are thousands and thousands of apps in the marketplace. I am sure they are either reviewing all in their due time or relying on users/competitors to report offending apps.
Rating: 5 Votes

brdeveloper
When browsers become capable of running rich 3d graphics and sound, OS-dependent apps will be only needed in some critical applications. So AppStore will be just one more site where people buy stuff. SJ's "dream" of having HTML5 Flash-like content will affect negatively the AppStore business.
Rating: 4 Votes

how is it a terrible practice?

those are apple's rules in their store. if a certain company doesnt want to follow
it, they can take their business elsewhere


Not to mention, Apples rules have an upside: if all subscriptions are handled the same way, and its the same as your music and app buying (rather than giving your credit card out in random ways to many random companies) then the subscription process is very consistent, secure, trusted, and user-friendly. Now, its not friendly if the company chooses not to participate, but thats their choice. Match.com would probably stand to make a lot of money AND please their customers* if theyd change their mind.

Most of what Apple does is for the sake of users first, and developers come second. User experiencenot a 30% cut of subscriptionsis how Apple makes nearly all of its money!

* Well, maybe not please their customers :p Online dating is pretty close to a scam that preys on a bottomless resource: loneliness! False hope in exchange for a piece of your income :) (I havent tried Match, but Ive tried others. And I have friends who have been burned by Match for no result.)
Rating: 4 Votes

GREEN4U
Think of how many of us men won't get laid because of this. Way to go :apple:

soco
Understandable. Good thing the Safari browser is good enough to use in the meantime.

Great app though. Used it to find my fiance. :D
Rating: 4 Votes