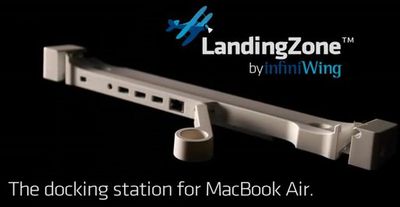 - Total of 4 USB 2.0 ports; no need to attach a separate USB hub
- Built in 10/100T Ethernet port; no more dongles for the Ethernet or fumbling with the cable
- Built in Mini DisplayPort capable of driving resolution up to 2560x1440
- Built in locking port compatible with all the Kensington Locks; now you can secure your MacBook Air
- Two models to support either the 11" or 13" version of the MacBook Air (2010 or later)
- Beautifully designed and engineered for simplicity, elegance, reliability and functionality (patent pending)
- Comes with US power adapter which accepts wide range of input voltage (100~240 Vac)

Can't you just pop the laptop out of the dock and walk out of the room? Does the doc just hold on to your USB ports really tightly?

Afraid I'm not willing to Kickstart this one. :P
Score: 6 Votes (Like | Disagree)

Stingray454
Great idea, but.. Why not take advantage of the thunderbolt? A TB hub would be awesome, or maybe just use the TB to get gigabit ethernet. Probably comes down to licensing costs, but I would personally not go without a thunderbolt hub/extension/whatever. Right not it seems to turn the Mini DisplayPort / TB port to only displayport, making it unable to use any TB peripherals.

Also, agree about the looks, hope they make a version in brushed aluminum or similar as well.
Score: 5 Votes (Like | Disagree)

macrumorsuser10
I would only buy one if it's made of aluminum and of the same colour as the MacBook Air. I am not putting anything that looks like cheap plastic on my desk.
Score: 5 Votes (Like | Disagree)

guan
Not that great

This doesnt have any FireWire ports and only has 10/100 Mbps Ethernet, not Gigabit. The USB hub connects to your MacBook Air via USB, as does the Ethernet controller. It probably wont be as fast as you expect from, say, the equivalent function on a Thunderbolt Display. Theres no Thunderbolt support at all.

Finally, and this isnt completely obvious for the final product but is true for the clear plastic prototype theyve posted, it doesnt power your MacBook Air directly: you need to plug in a regular power adapter with the MagSafe head that will plug in to the Air, and then the docking station presumably needs a separate power supply.

I guess for pre-2011 Airs you cant do much better, but as a 2011 Air owner I would wait for a Thunderbolt model. I doubt they can solve the power problem because Apple doesnt license MagSafe.
Score: 4 Votes (Like | Disagree)

reden
This isn't a dock, this is a USB hub
Score: 3 Votes (Like | Disagree)

SuprUsrStan
From the looks of it, it does not support thunderbolt because the license and implementation would bump the cost of the device to $1000 according to the inventor. Also, there isn't an easy way to just leave it unblocked because the concept of the device is to be able to detach everything by flipping the lever.

Clever design. It's just a damn shame thunderbolt would cost so damn much.

EDIT: "- Until two months ago, the price of an entry level Thunderbolt peripheral is over $1000."
Score: 3 Votes (Like | Disagree)
Read All Comments