The iPhone 4S officially launched in fifteen new countries today, with Hong Kong and South Korea being two of the highest-profile new markets.

M.I.C gadget followed the opening in Hong Kong, noting that over 3,000 people showed up at Apple's massive new flagship store in the IFC Mall. But Apple staff reportedly allowed only 1,250 of those people to line up for the device, resulting in a significant number of people being turned away and milling about in advance of the opening. 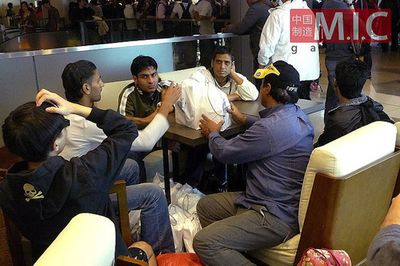 Hong Kong scalpers collecting bags full of iPhones for gray market distribution
Hong Kong has long been a popular market for scalpers given its close proximity to China proper and its lack of sales taxes and VAT. Given that the iPhone 4S has not yet launched in China, the Hong Kong launch was indeed primed for a significant gray market push from scalpers. M.I.C gadget notes that the vast majority of people in line at the Hong Kong Apple store appeared to be purchasing on behalf of scalpers, with many of them having been paid to stand in line and purchase the maximum of five devices. Following pre-orders last week that sold out in just ten minutes, reports indicate that Apple's retail store sold out of its own stock within three hours.

iPhone 4S line at flagship KT store in South Korea
iPhone 4S lines were also long in South Korea, as reported by Yonhap, with carriers KT and SK Telecom serving as the primary launch locations given the absence of any official Apple retail stores in the country. SK Telecom invited the first 100 pre-order customers to a midnight launch event with local hip-hop artists and other fanfare, while KT opted to focus on the more traditional customer lineup for the morning launch of the device.

Why doesn't Apple limit the number to 3 or better 2 devices, at least for the first weeks. Five phones per person is just a welcome for scalpers.
Score: 7 Votes (Like | Disagree)

billu2006
I'm Hong Kong people. Most of the buyers, sold their iPhones straight away after they have bought the phones. Proximately, they can get at least HK$1000 per 1 iPhone.

As a truly end user of iphone and mac lover, i really hate this kind of business. Everyone is crazy to get iPhone to sell.One of my friends, pre-ordered 16 pcs online on apple store, and it is common for anyone who wants to make profit on it.Online apple store stopped the pre-order just 20 mins after they launched it. So you can imagine how many end user cant get their iPhone to use.

I dont know if it is a common phenomenal around the world:(

Sorry for my poor english since english is not my first language
Score: 4 Votes (Like | Disagree)

HK is known for scalping. It's nothing shocking at all. China is filled with rich people who will spend any amount to acquire new and fancy things. As long as the people in China are so loaded, this scalping won't end.

90% of the people in the line in HK do not love Apple. They do it to scalp. Also, they are all black, brown or Filipino people. They are paid to line up.
Score: 3 Votes (Like | Disagree)

Why doesn't Apple limit the number to 3 or better 2 devices, at least for the first weeks. Five phones per person is just a welcome for scalpers.

I have been saying this since the pre-order started, Apple LOVES scalpers.

5 phones per person is nothing compared to the 10 per person limit on online pre-order! I believe Apple has a 2 per person limit everywhere in the world but Hong Kong, which is so close to China where iPhones are of huge demand and not being sold yet. Why? Who is doing the dirty business?

Those people in the Hong Kong pic are not ethnically Chinese. I think the pics were mixed up.