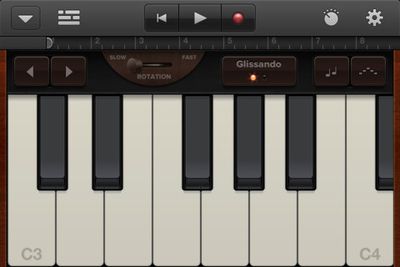 Apple today announced the launch of GarageBand for iPhone and iPod touch, making the previous iPad-only version a universal app.

“GarageBand on iPad has been a big hit and we think customers will love using it on their iPhone or iPod touch,” said Philip Schiller, Apple’s senior vice president of Worldwide Product Marketing. “The innovative Multi-Touch interface combined with Smart Instruments makes it easy to create great sounding music, even if you’ve never studied music or played an instrument before.”

GarageBand [App Store] is available in the App Store for $4.99, with the new version 1.1 bringing iPhone and iPod touch support and several other enhancements.

The update is just going live now and should be rolling out to all markets at this time.

iphone screen is too damn small for this... dammit apple... :mad::mad:

Yeah, they shouldn't have forced you to buy it! Seriously, those jerks!
Score: 13 Votes (Like | Disagree)

Excellent! Now when can we get USB to instrument support? An iPad or iPhone would be ideal to plug into a MIDI piano.


CoreMIDI support was added in 4.2. You use the Camera Connection Kit to connect USB instruments and interfaces.
Score: 9 Votes (Like | Disagree)

Okay so if I download Grageband for the iPhone4S and then buy an iPad will the same app work for both?

iphone screen is too damn small for this... dammit apple...:mad::mad:

I'm really trying to understand why this bothers you so much. Apple didn't push it to your phone.
Score: 8 Votes (Like | Disagree)

kjs862
pretty cool, now only if i had some talent :rolleyes:
Score: 8 Votes (Like | Disagree)


Want this on my dumb phone:D
Score: 6 Votes (Like | Disagree)