Last week, we noted that Apple is unlikely to update its Mac Pro line until early next year at the soonest, as Intel's Sandy Bridge E processors intended as the successors to the current Mac Pro chips have been delayed until the first quarter of 2012.

Newly-released pricing information from CPU World now offers a bit more data to help analyze which of the new E5-2600 and E5-1600 series Xeon processors Apple is likely to use in the next-generation Mac Pro models. 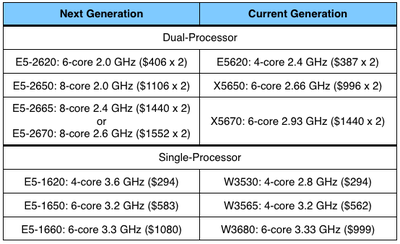 Apple's current dual-processor Mac Pro lineup utilizes Intel's "Westmere" processor family, with the E5620, X5650, and X5670 as options. Intel launched those processors last year priced at $387, $996, and $1440 respectively. With pricing for the upcoming E5-2600 series having been revealed, it certainly does appear that Apple will be able to use the $406 6-core 2.0 GHz E5-2620 in its low-end dual-processor configuration at or near the current $3499 pricing.

As for the lower-end single-processor Mac Pro configurations, Apple is likely to utilize Intel's E5-1600 series processor line, also scheduled for launch in the first quarter of 2012. Pricing on those chips was revealed last month, with the forthcoming quad-core 3.6 GHz E5-1620 ($294) and 6-core 3.2 GHz E5-1650 ($583) slotting nicely into the existing low- and mid-range pricing. At the high end of the single-processor line, however, Apple may have to bump up to the E5-1660 at $1080. The E5-1660 carries the same 6-core, 3.3 GHz specs as on the current high-end single-processor model, but offers higher turbo multipliers and L3 cache.

I really hope you're being sarcastic about clock speeds...
Score: 11 Votes (Like | Disagree)


Have you seen a comparison of your computer to the current models? You're talking ancient technology that's significantly slower. Remember, clock speed is meaningless outside comparing otherwise identical processors.


Ah, the good ol' Megahertz Myth. You can't possibly think a dual 2.5 G5 will be faster than even the current gen mac pro, it just doesn't work that way. They used to sell pentium 4 processors at 3.0GHz+, and I'd bet that a core 2 duo would toast that at 1.6GHz
Score: 8 Votes (Like | Disagree)

Would Apple please offer an affordable i7 tower computer.
One that could be built to order like any other computer.

shompa
These insane Intel prices is because they don't have any competition. When the MacPro was released, AMD had server processor in Intels class = Intel sold Xeons for 300 dollar.

ARM announced its 64 bit CPU for late 2012 release. Lets hope that will force Intel to stop have 95% profit on each CPU.
Score: 7 Votes (Like | Disagree)

Uhhhh... i already have a dual 2.5ghz G5. I want something with higher clock speed.

:confused: Your machine is like, 8 years old. Virtually any new Mac Pro will run circles around it.
Score: 7 Votes (Like | Disagree)
Read All Comments