Adobe has launched the Universal iOS app and Mac app for Carousel this evening. Carousel is Adobe's cloud storage service that allows you to access your entire photo library from all your devices.

Adobe® Carousel is the only photography solution that gives you access to your entire photo library from all your iPad, iPhone, and Mac—no storage issues, no manual syncing hassles. Enjoy your photos anywhere you are, and make them look terrific using the same powerful photo-processing technology that's used in Adobe Photoshop® Lightroom®, so you get the finest photo-editing results delivered consistently no matter what type of device you are using. Create the ultimate family photo hub by sharing a photo library with family members to contribute shots and weigh in on favorites.

The service was first announced back in September and will support Mac, Windows, iOS and Android platforms. 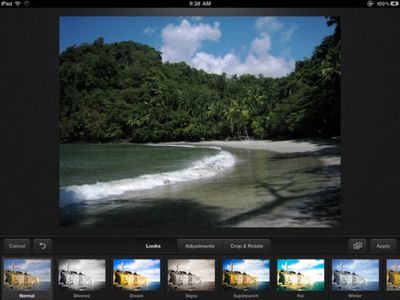 Beyond just online storage and syncing, the Carousel app also offers photo editing as well. The service is a paid subscription that starts at a discounted $59.99 per year or $5.99 per month. Normal pricing will be $99 per year or $9.99 per month. There is a free 30-day trial offered at launch.

Some of the features listed by Adobe include:

- Simply add photos to your Adobe Carousel photo library on your iPad, iPhone, or Mac, and you’ll instantly have access to them in Adobe Carousel on your other iPad, iPhone, and Mac devices.
- Easily crop, rotate, adjust exposure, and make other corrections, or lend your photos serious style with unique looks.
- Create a family photo library without the hassle of sending emails, handing off drives, and trying to figure out which photos to touch up or use in special projects. Simply invite family members to add photos to your library via their own Adobe Carousel apps, and let them flag their favorites so everyone can quickly find the best-loved shots.
- Share those moments that matter by sending your photos straight from Adobe Carousel to Facebook, Twitter, and Tumblr.
- Snap new photos right from Adobe Carousel on your iPhone or iPad, and they’ll instantly appear in your photo library on all your devices.

Both the iOS and Mac apps are free downloads in their respective App Stores (iOS, Mac)

OrangeSVTguy
Sounded good till up until the subscription cost.
Score: 13 Votes (Like | Disagree)

I'm really interested in this product. I've been chatting with John Nack about it on Twitter. Adobe seems to be heading in all the right directions lately. It's so wonderful to see a great company that was beginning to become a little bit lethargic alter their course and head for the future. I'll be applying at Adobe (among other places) when I graduate this May. Wish me luck!


It may just my perception but Adobe seems to have really woken up after Jobs put a cattle prod to their posterior in 2007.
Score: 7 Votes (Like | Disagree)

I wouldn't pay that much for an app. Even the Adobe Lightroom isn't cost that much, student price.
Score: 5 Votes (Like | Disagree)

ProwlingTiger
Just one more service I would have to sync my photos to. Not buying it until I can have full blown Photoshop or Lightroom on my iPad. Until then, I have no need to have Adobe photo storage.

For those wondering, I do in fact pay for photo storage presently - SmugMug. But even that is only $150 and allows me to sell my photos. Cheaper plans are also available. Why would I want to pay Adobe $100/yr just to do some low-scale editing on my iPad? Now if they had a truly great Mac/PC companion app *cough*Lightroom*cough* which the photos synced to and if I could sell my photos through Carousel, that would be absolutely amazing.

All I want is one service to 1.) host photos 2.) sell those photos 3.) edit them anywhere with powerful editing tools 4.) sync all the photos automatically to the Cloud from my Mac/PC.

carmenodie
Adobe must be getting high off their own supply!
I ain't paying no effing subscription fee for that BS!
Score: 2 Votes (Like | Disagree)
Read All Comments