Steve Jobs Biography Reviewed and Other Tidbits From the Book 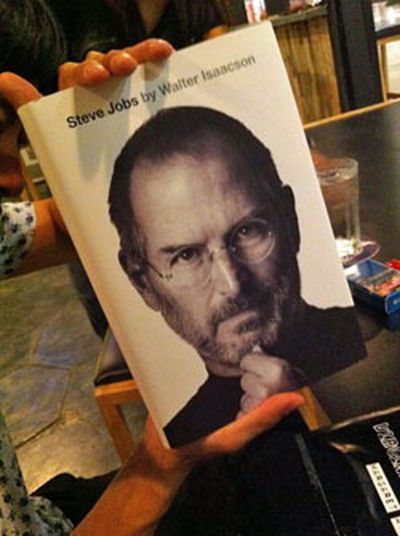 The much anticipated Steve Jobs biography is officially launching on Monday, October 24th. Despite the official release date, many copies have already started circulating. The image on the right is from a book delivery from late last week (thanks Ernest).

The New York Times provides a positive review and nice overview of the book which was authored by Walter Isaacson.

“Steve Jobs” greatly admires its subject. But its most adulatory passages are not about people. Offering a combination of tech criticism and promotional hype, Mr. Isaacson describes the arrival of each new product right down to Mr. Jobs’s theatrical introductions and the advertising campaigns. But if the individual bits of hoopla seem excessive, their cumulative effect is staggering. Here is an encyclopedic survey of all that Mr. Jobs accomplished, replete with the passion and excitement that it deserves.

Several other interesting tidbits have emerged from the early copies of the biography. We've covered some of the big revelations in previous articles, but here are a few others that are notable.

- Jobs viewed textbooks as the next business he wanted to transform. He met with major publishers about it. Jobs also discussed 4G data capacity in a recent board meeting in August. - NYTimes
- Jobs described Microsoft as "mostly irrelevant" due to being run by salespeople. He didn't believe Microsoft would change as long as Steve Ballmer was in charge. - NYTimes
- "Jobs confided in Sculley that he believed he would die young, and therefore he needed to accomplish things quickly so that he would make his mark on Silicon Valley history. " - Huffington Post

Walter Isaacson will be interviewed 60 Minutes tonight and is also said to be showing interview tapes of Steve Jobs.

The book is available on Amazon and iBooks.


It's impossible to say, of course, but I suspect (and perhaps the book will back this up) that the experience he gained from leaving Apple, running NeXT and Pixar, etc, and also the path that Apple took during his absence, might have been instrumental in turning him into the sort of leader he was for the last decade.

Not that he wasn't a visionary genius before that, of course, but I think that those experiences may have given him a different, more balanced perspective and an improved set of business and management skills that enabled him to be much, much more effective at (profitably!) bringing his visions into reality following his return to Apple.
Score: 14 Votes (Like | Disagree)


Steve Jobs sometimes remarked (and I agree with him) that getting fired from Apple was the best thing that ever happened to him.

The time Steve Jobs spent with NEXT taught him about the realities of the computer business. About how hard it is to sell $10,000 machines to big insitutions.

The Steve Jobs who returned to Apple in 1997 was an immeasurably more seasoned, mature, and accomplished executive. A guy who'd got a couple more succesful (sorta, in the case of NEXT) startups under his belt. That bought him an immense amount of credibility and respect when talking to people at Apple. (There were quite a few people who'd been glad to see Steve leave Apple back in 1985.)

People have commented about how rich Jobs would have been if he'd just held on to his Apple stock. That's silly: If Steve hadn't sold his Apple stock back in 1985, he wouldn't have had the money to start NEXT or buy Pixar. And Apple would have gone bankrupt or been bought out sometime around 1999.
Score: 7 Votes (Like | Disagree)

If Steve Jobs had not left Apple he would not have started NeXT. Without NeXT there would be no OS X. Apple may have been forced to stick with OS9 that had many problems. One can predict what would have happened, but if Steve had stayed at Apple, Apple to day would be quite different.
Score: 6 Votes (Like | Disagree)


I'd say the person who left Apple and the person who returned were not the same. A major setback like being thrown out of the company that he started could have weakened him, but instead made him a lot stronger.
Score: 5 Votes (Like | Disagree)

adcx64
Just pre ordered via iBooks. That's the way Steve would have wanted us to buy it. I can't wait to read this.
Score: 5 Votes (Like | Disagree)

the8thark
Anyone who wants the book to be a surprise when they read it should not be here on these forums. As these forums are not full of book spoilers. Sadly.

We've covered some of the big revelations in previous articles, but here are a few others that are notable.

My point exactly. These big points people want to discover in the book not be spoiled to them. If you had them in an area of the website - spoiler alert so we can avoid it. But no they are plain in view on front page of website. You can not avoid seeing the spoilers.

Would have been nice to be given the choice - to see the spoilers or not.
Score: 4 Votes (Like | Disagree)
Read All Comments