For a detailed and complete list of data see iLounge's review. This graph compiles some of the data (AT&T only): 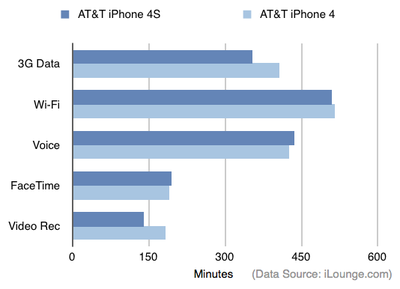 One interesting finding with 3G data was that while their Verizon 4S unit ran for the same time as the AT&T model (~ 5 hours and 54 minutes), they found the Sprint model to lag at 5 hours and 23 minutes. Comparisons across mobile providers may not be completely fair due to differences in signal strength which could impact battery life.

Ultimately, their conclusion on iPhone 4S battery life is based on what your exact usage model is:

If you spend much of your day near a Wi-Fi network and only rely upon the iPhone 4S for web browsing and phone calling, you won’t notice a major difference—unless you’re thinking of switching to Sprint, in which case we’d be a little concerned. Similarly, if you use 3G data, plan to record or play videos, or want to listen to hours of audio during the day, you can expect greater battery drain from the iPhone 4S.

As we mentioned, there may be some confounding data due to regional signal strengths, but given the other complaints about Sprint's data speeds, it still seems to be the worst choice amongst the iPhone carriers. iLounge's full review covers many other areas and is worth a read.

Now, we should note that some users seem to have been experiencing dramatically decreased battery life on their iPhone 4S. One solution to that is said to be the calibration of the battery, in which case you drain your entire battery once and then charge to full. Some have found their battery gauge to be inaccurate until this is performed. Apple includes other tips on their site about improving your battery life on the iPhone.

Only to find that battery has gone backwards.

Most of you geniuses dont realise that battery should get better with performance gains.

Every generation the power usage goes down with performance going up.

Basically the A5 is just a clocked up CPU with a better GPU.

My iPhone 4 has gotten faster with IOS 5 so i doubt the performance gap everyone is seeing is all to do with the A5.


I don't know where you got your engineering degree but you should ask for a refund.
Score: 19 Votes (Like | Disagree)

Only to find that battery has gone backwards.

Most of you geniuses dont realise that battery should get better with performance gains.

Every generation the power usage goes down with performance going up.

Basically the A5 is just a clocked up CPU with a better GPU.

My iPhone 4 has gotten faster with IOS 5 so i doubt the performance gap everyone is seeing is all to do with the A5.


The A5 is just a clocked up CPU over the A4?? LOL, good to know you haven't educated yourself on the hardware at all.
Score: 15 Votes (Like | Disagree)

ArchaicRevival
As long as I don't have to install Task Manager and Juice Defender, I'lll be fine! :cool::apple:
Score: 12 Votes (Like | Disagree)

Ultimately, their conclusion on iPhone 4S battery life is based on what your exact usage model is[.]

I salute you, Captain Obvious: Protector of the Already Known!

(Directed at iLounge of course, not MacRumors!)
Score: 12 Votes (Like | Disagree)

elkk
god this sucks, on the off chance i use my phone for more than 6 hours, i'll never be able to find one of the worlds most generic charging cables OR an empty usb port anywhere in this backwards world.. i might as well just return the phone and buy a land-line, those things are true masterpieces, you don't even have to worry about a battery
Score: 11 Votes (Like | Disagree)

Was this with iOS 5 on the iPhone 4? Not clear from the article.

I've noticed significantly reduced battery performance under iOS 5. Top of my suspect list is the new location APIs being a much bigger overhead.
Score: 10 Votes (Like | Disagree)
Read All Comments