Gizmodo.com.br (via Gizmodo) claims to have images from Foxconn's Brazilian factory which shows the iPhone "N90A" model that will be introduced next week.

Now, as a reminder, the N90A is expected to be the low-end cheaper iPhone 4 model that is to be released alongside the iPhone 4S (N94) model. The current iPhone 4 carries a model number of N90, so changes are expected to be slight. So, these images don't actually show anything we don't already know, but do seem to represent a legitimate leak from a Foxconn factory producing Apple iPhones.

The [devices] are basically ready to be delivered, as shown in these photos obtained exclusively. The most interesting: they are a new model, it seems, will have less capacity and is cheaper.

Readers may recall that Foxconn has been working to expand iPad production into Brazil as well. Apparently, they have already been producing iPhones there. 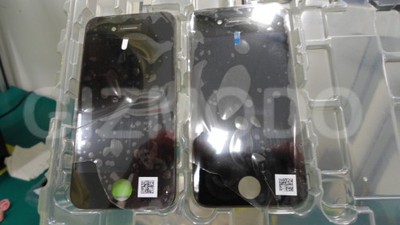 This second image shows the model number ("N90A") in the top left and shows it didn't pass inspection:

This model is supposed to represent the cheaper iPhone 4 (8 GB?) model that will replace the iPhone 3GS in the low end. The higher end iPhone is believed to be called the iPhone 4S and will carry an A5 processor.

korndawg
I love when posts get voted down just cuz u tell people something they don't wanna hear. There is no iphone 5 coming Tuesday. If there is, Apple has done a masterful job at keeping it 100% on lockdown. And yes, I'm utterly disappointed in this news.
Score: 41 Votes (Like | Disagree)

thelonelylimo
Now take a photo of the iPhone 5. :)
Score: 30 Votes (Like | Disagree)

Peace
If there is no iPhone 5 WHY are all these carriers showing iPhone 5 stuff ??

iBreatheApple
Well this sucks. I can't wait until the 4th so we can put this all to rest at last!
Score: 20 Votes (Like | Disagree)
Read All Comments

Friday May 14, 2021 11:52 am PDT by Juli Clover
Following the discontinuation of the iMac Pro, Apple also appears to be discontinuing Space Gray "Magic" accessories that it sold separately alongside the iMac Pro. The iMac Pro was the only Space Gray Mac, and Apple designed special matching accessories for it. The Space Gray Magic Mouse 2, Magic Keyboard, and Magic Trackpad all now say "While supplies last" in small wording at the bottom...
Read Full Article • 327 comments

Saturday May 15, 2021 11:08 am PDT by Juli Clover
Twitter has been working on some kind of subscription service since last summer, and Jane Manchun Wong, who often digs into new features coming in apps, has shared details on just what Twitter is exploring. Twitter's subscription service could be called Twitter Blue, and at the current time, it's priced at $2.99 per month. There will be a "Collections" section that allows users to save and...
Read Full Article • 104 comments