Friday September 30, 2011 9:36 am PDT by Eric Slivka
In late July, AT&T announced that as of October 1st it would begin throttling data speeds for customers on unlimited data plans who registered in the top 5% of heaviest data users. While AT&T no longer offers unlimited data plans, customers who had signed up for such plans prior to their discontinuation, including many iPhone users, have been grandfathered in and allowed to keep their unlimited plans. 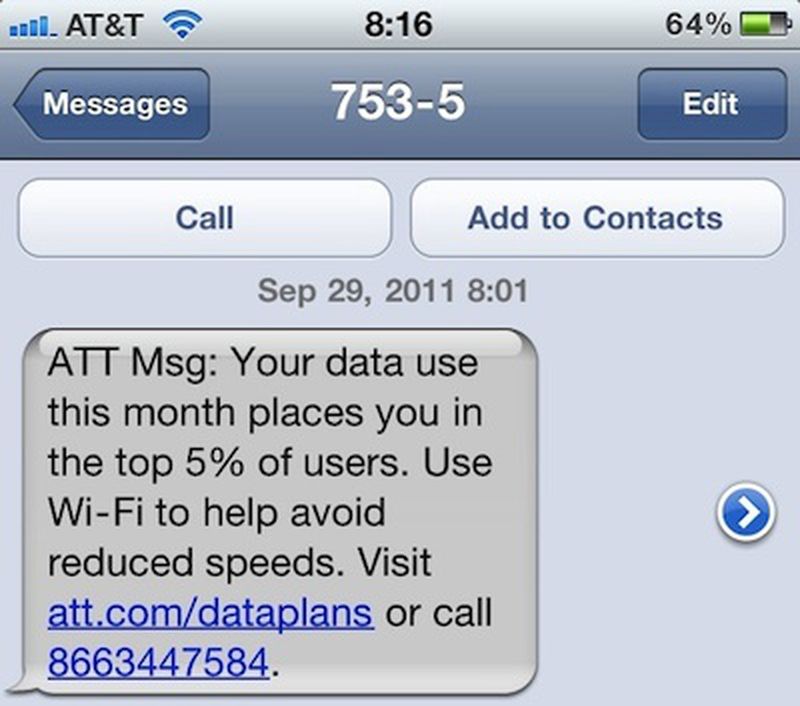 Reddit user "TheReverendZ" yesterday reported (via 9to5Mac) that he had received a text message from AT&T warning him that he had fallen into that top 5% group and encouraging him to use Wi-Fi to help avoid throttling of his data speeds. TheReverendZ notes that he typically uses 10-12 GB of data per month, as he does not have home Internet service, while "skelatwork" reports that he received a similar notice when he had passed approximately 11 GB of data for the month.

AT&T has noted that it will provide multiple warnings and a grace period before beginning to throttle data speeds, and it now appears that the carrier has begun the warning process. Customers subject to throttling will retain access to unlimited data but will see their speeds reduced until the start of the next billing cycle.


Throttled access ≠ No access. And as always if you're dissatisfied, switch to Sprint. Voting with your wallet always works.
Rating: 22 Votes

So if everyone is downloading only 1kb per month, and someone downloads 2kb then they would be in the top 5%.

I wonder if they have a 'lower' limit?
Rating: 16 Votes

Seems reasonable to me, as much as I dislike AT&T.

BC2009
This is almost a perfect way of handling this. AT&T is still providing unlimited access (like they promised) just at a reduced speed so you don't degrade the service of 19 in 20 for the sake of the 1 in 20 who wants to download 10GB of data per month (compared the average user which is typically under 250MB).

Effectively the guy using 10GB of data per month is throttling everybody else's service downward since there is only so much network pipe. And regardless of what AT&T does there will always be only so much network pipe. The more you increase bandwidth the more people will consume. So they need to throttle people who are over-using it and they clearly can't give any sort of minimum guarantees on bandwidth since there are so many variables.

Howerver, the problem with this is that it can't just be the top 5% of users. It needs to be two conditions:
1) You are in the top 5% of usage
2) Your network usage is greater than X GB per month (say 4 or 5 GB)

Why? Because if all these folks in the top 5% reduce their usage next month by 10%, they will likely STILL be in the top 5%. That's how percentages work. If everybody using AT&T only used 2GB of data per month on their unlimited then the person in the top 5% would be the person who used 2.01GB.

So AT&T's current policy will eventually fail if the top users seriously start dropping their usage because they will all come down together and therefore the net effect is to ask them to drop even further the next month.

I personally think that if you are using less usage than their current premium data plan (e.g.: 4GB) that they should never subject you to this throttling. Since effectively the "unlimited" plan's closest equivalent in the new structure is the 2GB + 2GB tethering plan (i.e.: the current top premium data plan).

So this is a good first step from AT&T, but it comes up short in the long run if it actually is effective in getting folks to reduce their usage.
Rating: 10 Votes

Throttling sounds reasonable in this case.

Most people who have unlimited don't really need it anyway. It's one of those psychological things.
Rating: 10 Votes

miles01110
Seems reasonable to me, as much as I dislike AT&T. Every other ISP has fair use policies to prevent the select few from affecting everyone else.
Rating: 10 Votes

I am altering the deal, pray i don't alter it any futher
Rating: 9 Votes

In the end though, if this will help me and the other normal usage users get better speeds and clear up the bandwidth....


You know what would help normal users get better speeds?

If ATT invested more in their infrastructure instead of trying to increase profit margins per user.

FreakinEurekan
How is it possible to use 11-12GB/mo on a phone without stealing tethering service? I'm going to have to go with "reasonable" on this policy from AT&T.
Rating: 7 Votes


Not only is it unfair because we all have grandfathered in 'unlimited' data plans (since when did unlimited=limited?), but also the way they calculate where/when they 'throttle' users back.

For everyone concerned with "fair," you should switch to AT&T's "fairest" plan of all.

The 2 GB plan lets you go as high as you want, with no throttling. You use what you want and pay for what you use.

NOTHING is more fair than that. Go get it. Those of us keeping our unlimited plans do so knowing that it's a compromise. It's a bit less fair but a bit cheaper.

The choice is totally yours.
Rating: 6 Votes