While Apple has received considerable publicity for its push to open dozens of new retail stores over the last three months, the company has also been renovating a number of its stores to bring them up to the latest designs. Most of these straightforward renovations result in the stores being closed for about a week, during which time they are boarded up with Apple's standard black construction barriers and posted with notices directing customers to either the closest alternative store location or to Apple's website for information on locations.

Among the locations currently under renovation in the lead-up to the iPhone launch: 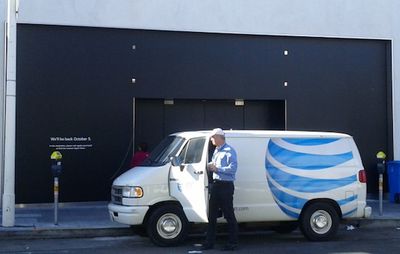 New layout of University Village retail store in Seattle
- University Village (Seattle, Washington): Closed September 26th through October 6th. GeekWire posted the details on the renovation, which include new display counters, Genius Bar, and other fixtures. Planning documents show Apple moving from a layout three product display tables wide to one using four narrower tables across the width of the store. The report also notes that Microsoft will be opening its own retail store directly across a small parking lot from Apple's store on October 20th, giving Apple additional incentive to spruce up the location.

At least two other stores, Biltmore in Phoenix, Arizona and Sagemore in Marlton, New Jersey, were closed for renovations last week and have since reopened for business.

Some readers have noted that all of the closures are for stores open to the street and not in enclosed malls and shopping centers. Consequently, the closures may be related to the installation of new security grating to help deter smash-and-grab robberies that have become increasingly common at Apple's street-facing stores. With the exception of the University Village store in Seattle, it is unclear if there are additional renovations being performed at the stores.


Yeh :D I can't wait to see the new iPhone and watch it blow competition out of the water and protect its ideas to bits so no sheeping from samsung. All this new flashy retail stores all over the world I bet it just rubs lemon in the eyes of those haters out there. I bet some of them try to graffiti on it and get caught. Such a waste of life being an Apple hater. Unhealthy to be negative lol
Score: 6 Votes (Like | Disagree)

bDoc
So are they making the stores thinner too? :D
Score: 6 Votes (Like | Disagree)

There ain't much to the Apple stores to begin with
Score: 3 Votes (Like | Disagree)

Widashy
If these stores are getting renovated, iPhone 5 must be huge. Can't wait:D
Score: 3 Votes (Like | Disagree)

drumpat01
UPV in Fort Worth, TX

University Park Village in Fort Worth, TX was closed last week as well for about 4 days.
Score: 3 Votes (Like | Disagree)
Read All Comments