Apple has gone through several iterations of its retail store design in the 10 years the stores have been open. The original design had black borders with large, backlit Apple logo mounted to the front of the store, near eye-level. Then, the stores went through an aluminum phase, with much more glass. The stores had a smallish aluminum border surrounding both the front doors and the window displays.

The most recent stores, such as the new Apple Store 4th Street in Berkeley, CA get rid of almost all the aluminum, and instead are almost entirely glass. 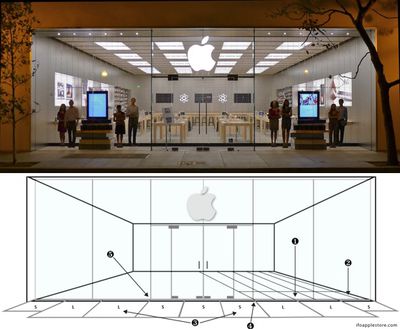 As IFOAppleStore notes, Apple's store architects have worked very hard to present an entirely symmetrical appearance for the 4th Street store. Apple has redesigned the sidewalk in front of the store with several different sized stone tiles to precisely match the sizes of the front window glass.

In this case, the master element is the stone floor tiles, which are 76 centimeters square (about 30 inches). The glass window panes are then manufactured to a multiple of that dimension. Outside, Apple routinely installs a new sidewalk in front of its street-facing stores. In this case, the sidewalk was made with contraction lines that are also multiple of the stone tile dimension. When all the painstaking design and construction work is finished, passersby and store visitors “see” the effect, but probably don’t realize why the store is so attractive.

The steel grating at that store is constructed of narrow horizontal rods and thin vertical strips that have a minimal cross-section. When the grating is raised, it’s stored entirely within the ceiling behind a thin access slot. When the grating is lowered, it slides down through narrow slots in the side wall.

The grate closes well behind the front window as well, so that Apple's perfectionist window displays aren't obstructed by unsightly, but necessary, security features.

thegoldenmackid
Now I can go in the stores without getting shakes from my OCDness.
Score: 9 Votes (Like | Disagree)

Now I can go in the stores without getting shakes from my OCDness.

The Apple logo is not symmetrical...

definely an order from Jobs
Score: 3 Votes (Like | Disagree)

notjustjay
Adrian Monk would be pleased.
Score: 2 Votes (Like | Disagree)

PJMAN2952
Will this happen to all Apple Stores again? Hope so. This looks cool.
Score: 2 Votes (Like | Disagree)
Read All Comments