9to5Mac offers a more complete picture of what users can expect with Apple's forthcoming "Assistant" feature, revealing that the Nuance/Siri voice-powered personal assistant will require the iPhone 4S/5 that will be introduced at next week's media event.

The report details the natural speech recognition capabilities of Assistant and its ability to integrate across a number of iOS services to offer a powerful personal assistant allow users to handle scheduling, reminder, and messaging tasks solely by voice. Examples of real-world applications of the feature include setting a personal reminder to pick up milk once the user arrives at a market, asking for GPS directions to a location, and composing and sending text messages by voice. 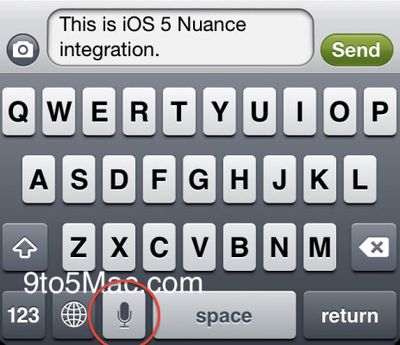 Assistant will also reportedly integrate a conversational aspect in which the system can ask the user questions to clarify and refine its understanding of what is being requested.

The system will actually speak back and forth with the user to gain the most information in order to provide the best results. The user essentially can hold a conversation with their iPhone like it is another human being. For example, if a user is making a meeting with me, they will say “setup meeting with Mark” and the first “bubble” of the conversation thread will say that. After that, the system will speak back: “which e-mail address should Mark be notified at, work or personal?” This question will both be spoken out loud by the iPhone Assistant and shown as a new “bubble” in the conversation thread. The user will then respond with the email address they want to notify me at, and the appointment will be made. The iPhone will even show a quick glance at a calendar view to confirm the appointment. If the Assistant was sending an SMS, as another example, a mini SMS view would appear so the user has a quick glance at the SMS thread.

Assistant is also said to integrate with WolframAlpha, allowing users to obtain answers to factual questions using the service's computational capabilities. Other voice-powered features coming as part of the package include integration with Apple's "Find My Friends" service and speech-to-text transcription from Nuance.

The report notes that the sophisticated voice features will require the new iPhone hardware from Apple, relying on the company's A5 system-on-a-chip and a bump in RAM to 1 GB to support the heavy workload. Both the A4-based iPhone 4 and A5-based iPad 2 currently offer 512 MB of RAM. Sources also reiterate long-standing claims of an 8-megapixel rear camera in the new iPhone.

MacRumors has independently heard very similar information regarding the Assistant capabilities in the next iPhone, lending credence to the details included in the report.

As for whether Apple's next iPhone will be an iPhone 4-like model known so far as the iPhone 4S or a redesigned iPhone 5, today's report notes that the next-generation prototypes capable of offering the Assistant feature have so far been seen as iPhone 4-like in design. But sources are careful not to read too much into that fact, as Apple had been rumored to be putting iPhone 5 internals into iPhone 4 cases for testing and secrecy purposes, and the company's final plans remain unknown.

Great. Yet another "article" that refers to a rumour from another site as though it's fact.


Yet if they didn't report on it, you would be one of the first to be asking "Why has MacRumors not posted on this yet!? OMG THEY ARE SLOW!!!"

Not everyone checks every one of these Apple/tech blogs like you or I. Better that they report on it so those who just follow MR can read it, rather than not report on it and nobody covers it.

Caliber26
I wonder how well this iPhone Assistant voice will integrate with the already-existing voices inside my head.
Score: 31 Votes (Like | Disagree)

vebs
I'm not really that interested in having a conversation with my phone. Seems more of a novelty feature to me.
Score: 25 Votes (Like | Disagree)

tharoc
Nuance is ok but not essential....Give me a faster processor, better battery life and a 4" screen and I'm happy...
Score: 20 Votes (Like | Disagree)

Great. Yet another "article" that refers to a rumour from another site as though it's fact.


you are reading macRUMORS. get over yourself.
Score: 15 Votes (Like | Disagree)

I can only hope that this new system will work better... I do really love the idea of being able to voice control my device... especially when driving.
Score: 13 Votes (Like | Disagree)
Read All Comments