Microsoft today officially unveiled its next-generation Windows 8 operating system, detailing how the company has "reimagined" the software to allow a single operating system to run on a variety of systems from tablets to desktops and Intel to ARM. The company's new "Metro" user interface emphasizes touch-centered input and full-screen apps much like the iPad, but also supports full mouse and keyboard input with the familiar underpinnings of earlier Windows versions. 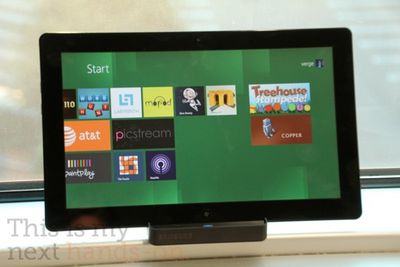 Perhaps most notable for Apple observers is Microsoft's tablet effort with Windows 8, marking yet another significant effort to unseat Apple's iPad from its dominating position atop the tablet market. This is my next offers a hands-on look at Windows 8 running on a prototype Intel-powered tablet device from Samsung, sharing a number of details about the functionality of the operating system. But while Microsoft acknowledges that Windows 8 is a work in progress, the current tablet implementation appears to be a somewhat rough integration of the Metro touch experience with more traditional desktop computing. The report summarizes Windows 8 for tablets as follows:

There’s a lot to digest here, and we’ve barely scraped the surface of Windows 8, so we’re sure our impressions will change over time… much as the OS will hopefully congeal later in the development cycle. If we’re going to be totally honest though, we’d describe Windows 8 right now as incoherent and contradictory. Touch response in the Metro UI is stellar, Contracts sound seriously useful, and snapping apps can make you more productive on a tablet, but whenever you want to get down and dirty with a traditional program, it’s back to the traditional desktop interface. There are two Control Panels, two versions of IE, and core apps are nowhere to be found (i.e. Mail, a camera app, etc.) Meanwhile, if you want to do anything with the desktop interface (save things you’ve actually planted on your desktop) you’ll probably find yourself thrown back to Metro since the traditional Start menu is gone. The whole user experience feels schizophrenic, with users having to jump back and forth between the two paradigms, each of which seem like they might be better off on their own. Still, as the title of the Microsoft show suggests, this is very much a work in progress and the apps and the tools are, well, still being built.

Questions also remain about architecture support, with the Intel-powered tablet running Windows 8 serving as a capable device but missing the benefits of ARM-based systems such as power efficiency. Microsoft promises that ARM support is an important component to the Windows 8 strategy, but the company is not yet able to offer hands-on time with such devices.

Powered by a 1.6GHz Core i5-2467M processor and a 64GB solid state drive, the system is absolutely no slouch on performance — everything from scrolling in the browser to the Start screen is extremely speedy and the system boots incredibly quickly. However, fan noise is very noticeable, as is the heat coming out of the top vent, and a fast boot doesn’t excuse the slow wake-up times compared to ARM-based cellphones and tablets.

It’s for these reasons we were pretty disappointed to see the tablet running on x86 architecture, with only a token gesture to ARM during our session, but VP of Windows Planning Mike Angiulo assured us that the progress on ARM is coming along quite nicely. He maintains they wanted developers to have top-notch hardware that was capable of running multiple instances, and thus went with the Core i5 hardware.

A developer preview version of Windows 8 will be available for download later today.

If Microsoft ends up shipping a tablet with a fan the whole team that designed the product needs to be fired.
Score: 49 Votes (Like | Disagree)

zipster
I love the idea of live tiles.

rwilliams
Only Microsoft would deliver a tablet and OS that would require a fan and produces a lot of heat.
Score: 17 Votes (Like | Disagree)

nagromme
One product being all things to all users/devices sounds great!

I don’t expect the reality to be as good as the sound :o But credit to Microsoft for trying some new things, as evidenced by Windows Phone 7. (Unlike so much we’ve seen with Android, Microsoft truly didn’t ape the iPhone!)

I believe that iOS and Mac OS are better products for being separate—and cross-pollinating to share their respective advances. But it’s very unlike Microsoft (or at least Ballmer) to see why that is.
Score: 15 Votes (Like | Disagree)
Read All Comments

Wednesday January 26, 2022 8:56 am PST by Joe Rossignol
Benchmark results have started to surface for MSI's new GE76 Raider, one of the first laptops to be powered by Intel's new 12th-generation Core i9 processor. Intel previously said that its new high-end Core i9 processor is faster than Apple's M1 Max chip in the 16-inch MacBook Pro and, as noted by Macworld, early Geekbench 5 results do appear to confirm this claim, but there are several...
Read Full Article • 249 comments