Apple is continuing to press forward with new retail store openings this week, working toward making good on plans to open over 30 new stores during the third quarter of this year. 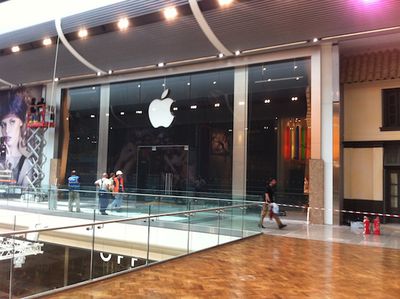 Apple's Stratford City retail store in London (Thanks, Luke!)
One unusual store opening will take place tomorrow as the Stratford City store opens up in the new Westfield Stratford City shopping center in the northeastern portion of London. The rare mid-week opening for Apple coincides with the grand opening day for the mall itself, a nearly 2 million square foot facility that will be the largest urban shopping center in Europe and serve as a key component of London's plans for hosting next year's Summer Olympics.

Apple's Nanjing East retail store in Shanghai
Finally, M.I.C gadget reports that Apple is getting close to an opening for its massive new Nanjing Road store in Shanghai, adding the company's "curtain opening" promotional signage that frequently appears at flagship store locations as the final touches are put on the new stores. The new Nanjing East location will span five levels, with the first floor devoted to product demos and sales and the second floor dedicated to Genius Bar and customer training activities. Portions of the third floor will offer support for business customers, with the remainder of the facility serving as offices for Apple's operations in the region.
[ 72 comments ]


I think this is part of what people clamouring for a store in their city fail to grasp. Apple demand many things to open a store. One is a large enough population. Two is that the population is affluent enough. Three is a premium/upscale mall with a vacant space of the correct size.


Toronto, Canada has like 7 Apple Stores, and they continue to open more here. The GTA area only has 5 million people.

I have not seen any reference to this store, and can't see anything on that website.

There is however an Apple Store opening in Braehead Shopping Centre (http://en.wikipedia.org/wiki/Braehead#Braehead_Shopping_Centre) this month (reportedly (http://www.heraldscotland.com/apple-to-open-new-west-of-scotland-store-at-braehead-1.1087127)). The third store in Scotland.


I'll second that, when I was last over at Braehead the store front was blacked out with the big white :apple: logo stuck on front and centre, so I would imagine it was fairly imminent.

Its where the Gap store was on the ground floor.

I also cant turn up any evidence of an East Kilbride store other than it was rumoured prior to the Braehead one becoming public knowledge; I dare say it was a rumoured likely site and Braehead won out in the end.
Score: 1 Votes (Like | Disagree)

For Info, not sure if it's already been posted, there's one opening in East Kilbride shopping centre, seen it the other day. http://www.shopek.co.uk/

I have not seen any reference to this store, and can't see anything on that website.

There is however an Apple Store opening in Braehead Shopping Centre (http://en.wikipedia.org/wiki/Braehead#Braehead_Shopping_Centre) this month (reportedly (http://www.heraldscotland.com/apple-to-open-new-west-of-scotland-store-at-braehead-1.1087127)). The third store in Scotland.
Score: 1 Votes (Like | Disagree)

Rumor has it that the Hugendubel Book Store that is shutting down on Tauentzienstraße 13 across from the memorial church on Ku'Damm is going to be turned into an Apple store :) The truth of the matter is that German urban planners, especially in Berlin, have unbelievably strict restrictions and regulations when it comes to building new structures in the city, and it's unclear whether a bright white store with tons of glass is very "fitting" for this particular area of the Berliner cityscape. So, don't hold your breath, but if there is one I'm pretty sure that's where it'll be.


First read concrete info about the Berlin Apple Store in January. Apparently it's on Ku'damm 26, which is an old cinema building...