FOSS Patents and Bloomberg report that a German court has upheld an earlier ruling preventing Samsung from selling its Galaxy Tab 10.1 in that country following an infringement complaint by Apple.

“The court is of the opinion that Apple’s minimalistic design isn’t the only technical solution to make a tablet computer, other designs are possible,” [Presiding Judge Johanna] Brueckner-Hofmann said. “For the informed customer there remains the predominant overall impression that the device looks” like the design Apple has protected in Europe.

Samsung said it will appeal. The ruling “severely limits consumer choice in Germany” and “restricts design innovation and progress in the industry,” the company said in a statement e- mailed after the ruling was issued.

A preliminary injunction against the sale of the Galaxy Tab 10.1 was initially granted one month ago and covered nearly all of the European Union, but the order was quickly suspended in practice for all countries except Germany after questions about the court's jurisdictional authority arose. 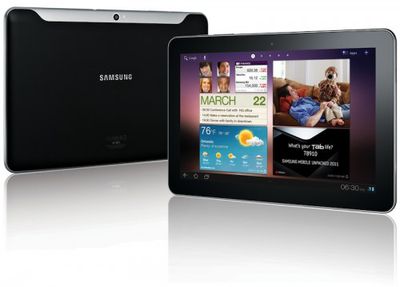 FOSS Patents notes that Samsung now has two options to overturn the German ban, either a separate fast-track case in a higher court that would likely take a few months or an automatic continuation of the existing case in the lower court into a full-blown lawsuit that could take up to a year to resolve.

The report also raises questions about whether today's injunction may even extend beyond the Galaxy Tab 10.1 to other Galaxy Tab models from Samsung.

The way the judge reportedly pronounced today's decision, Samsung won't be able to promote or sell any new products in Germany that infringe the successfully-enforced Community design for as long as the injunction is in force. In other words, if Samsung came out (hypothetically speaking) with a Galaxy Tab 9.0, it seems the injunction would apply.

Just last week, Apple was granted a new preliminary injunction barring the promotion and sale of Samsung's new Galaxy Tab 7.7 in Germany. The injunction forced Samsung to immediately pull the product from the expo floor at the IFA show in Berlin last week.

Bigdaddyguido
I know many here is hating on this "minimalistic design" wording in the ruling, but I feel that it's the whole reason the iPhone/iPad have been so dominating. Look, every tablet that was marketed before the iPad was complex, some had swiveling screens to convert from laptop to tablet, they all used styluses, most had tons of buttons, some had handles, etc.

I think what's more interesting about the "prior art" from Kubrick and even star trek is these movies/shows were intending to make futuristic devices that seemed desirable but were straight forward. Somehow, in the months leading up to the release of the iPad, every competitor stood around, some even openly admitted they were purposefully delaying production because everyone wanted to see what apple would bring to the table.

Now, a couple years later, everyone is trying to say that this simple design is obvious and that everyone had obviously thought of it before. Well, that may be true, we can't read minds in the past, but apple was the only one with the balls to release such a simple device, I think it's fair to say they deserve to reap the benefits of their bold move.
Score: 19 Votes (Like | Disagree)


Dutch court says no in a preliminary hearing. German court says yes for permanent injunction. And Samsung doesn't like its case too much in Australia considering that they have voluntarily delayed launching the Tab there.

Maybe Kubrick's tablet and a Samsung picture frame don't prove as much as some people thought it did.

I still think Apple's claims are too generic. I bet Samsung's idea is just to drag this out as long as they can, before introducing a slightly modified version that avoids direct infringement. Make sure Apple has put all its cards on the table.
Score: 15 Votes (Like | Disagree)


Ipad is square, Galaxy tab is rectangle. Galaxy tab has ZERO home buttons, Ipad has one. Minimalistic? Galazy tab is minimalist than the iPad.


No offense, but my 4 year old daughter wants to tell you about the definition of a square. :)
Score: 12 Votes (Like | Disagree)

Arnold Ziffel
There are many posters here who clearly do not understand what a 'patent troll' is. I believe you'll find the definition does not fit what Apple is doing, which is protecting their IP!
Score: 9 Votes (Like | Disagree)

Yeah you're right I had hoped that their failures in the 90's would have humbled them but low and behold as soon as they were able to make a comeback they became even worse than Intel, Google and MSFT.


The App selection screen is something called the App drawer and yes it is not the default desktop UI at all. It is something you pull up.

And the "promo" blurbs you probably saw is the Apple cherry picked evidence, I'm sorry to say. Don't worry, most people that are not into Android never bothered to look up how Android/TouchWiz work and don't know any details beyond the FUD spread on MacRumors and AppleInsider.
Score: 8 Votes (Like | Disagree)
Read All Comments

Sunday February 5, 2023 6:06 am PST by Hartley Charlton
A new version of the Mac Studio with the "M2 Ultra" chip is unlikely to arrive in the near future, according to Bloomberg's Mark Gurman. In the latest edition of his "Power On" newsletter, Gurman explained that since the upcoming Apple silicon Mac Pro is "very similar in functionality to the Mac Studio," Apple may wait until the release of M3- or M4-series chips to update the machine, or...
Read Full Article • 498 comments