The Wall Street Journal reports that Apple has received certification to sell the 3G iPad 2 in mainland China. Up until now, Apple has only been allowed to sell the Wi-Fi models of the iPad 2 in China.

According to China's Telecommunication Equipment Certification Center, a device by Apple with third-generation high-speed wireless data capabilities was issued the network access license needed for the company to begin official sales in China. The device, listed under model number "A1396," is compatible with the 3G standard WCDMA, and would work with the cellular network operated by Apple's local iPhone partner, China Unicom (Hong Kong) Ltd.

Model number A1396 is Apple's model number for the 3G iPad 2 that was released in the U.S. in March.

Separately, Penn Olson reported that Apple's official China site had listed 3G iPad 2s for sale for the first time yesterday (now removed). Shipping was listed as within 2 or 3 weeks. The site explains that Apple's 3G products are always slower to enter the Chinese market. 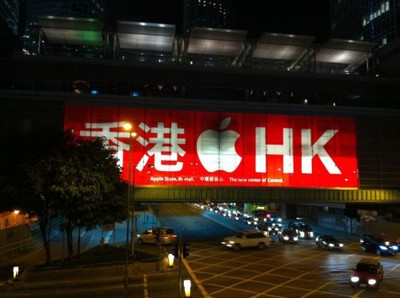 In related news, Apple officially confirmed that Apple's first Hong Kong retail store would be opening this quarter in the International Finance Center's IFC mall. Photos of the beginnings of the store have been sent in to us and other sites. Engadget China reports the store will open on September 24th.

Apple's rapid expansion in its Greater China market of China, Hong Kong, and Taiwan has been well documented with 6x year over year growth reported in July. At the time, now Apple CEO Tim Cook said they believe that Greater China is "a substantial opportunity for Apple and we're just scratching the surface."

They had to wait for Steve to demission before opening a store in HK accompanied with such an un-apple sharp red color banner...


Well red is a VERY auspicious colour in Hong Kong, and I think they are just responding to what people like, so it makes sense. It's not that un-Apple when you think about it, they've just changed the colour!

Apple is officially ending its ignorance of Hong Kong for decades :-) Hong Kong people can finally enjoy customer service which is up to Apple's standard instead of being transferred to some random third party "authorized" repairer....:D

Good news for Apples bank account, it's nice hearing about their continued growth in that market, despite the black market of copies and cloned iOS devices.

Just wished this news also included information about an iPad 3, but I can always have wishful thinking! ;)


They're probably thinking: 'If we don't go to China, the fakes will!', so it's a way of dealing with it!
Score: 4 Votes (Like | Disagree)

haruhiko
Apple is officially ending its ignorance of Hong Kong for decades :-) Hong Kong people can finally enjoy customer service which is up to Apple's standard instead of being transferred to some random third party "authorized" repairer....:D
Score: 4 Votes (Like | Disagree)


According to my local phone company, there are three compatible (read: there's a working roaming agreement) WCDMA networks in Hong Kong.

Having said that, the article is about mainland China. I'm not sure why (Hong Kong) is listed in the quote.
Score: 1 Votes (Like | Disagree)

The fact that a different dialect used does not matter; there are hundreds of dialects spoken withiin mainland China.

The fact that it has different administration is irrelevant.

No it's extremely relevant. The Hong Kong SAR is more than just a label. Virtually everything is separate from mainland China; the economy, the political system, laws and regulations, government infrastructure, flag, etc. About the only thing they share is a national defense. You do have to go through border patrol to get between Hong Kong and mainland China.
Score: 1 Votes (Like | Disagree)

840quadra
Good news for Apples bank account, it's nice hearing about their continued growth in that market, despite the black market of copies and cloned iOS devices.

Just wished this news also included information about an iPad 3, but I can always have wishful thinking! ;)
Score: 1 Votes (Like | Disagree)
Read All Comments

Friday July 10, 2020 2:58 am PDT by Tim Hardwick
At last month's WWDC, Apple officially announced that its Mac computers will be transitioned from Intel x86 to homegrown Apple Silicon chips. Apple said it plans to deliver the first Apple Silicon Mac by the end of the year and complete the transition in about two years. According to Apple analyst Ming-Chi Kuo, a 13.3-inch MacBook Pro with a form factor similar to the current 13.3-inch...
Read Full Article • 189 comments

Friday July 10, 2020 3:33 am PDT by Tim Hardwick
Apple TV+ today debuted "Greyhound," the highly anticipated Second World War movie starring Tom Hanks as a naval officer given command of Navy destroyer Greyhound in the Battle of the Atlantic. "Greyhound" features Hanks as George Krause, who must fight his own self doubts and personal demons as he leads a convoy of Allied ships against German U-boats to prove that he belongs in command. ...
Read Full Article • 64 comments