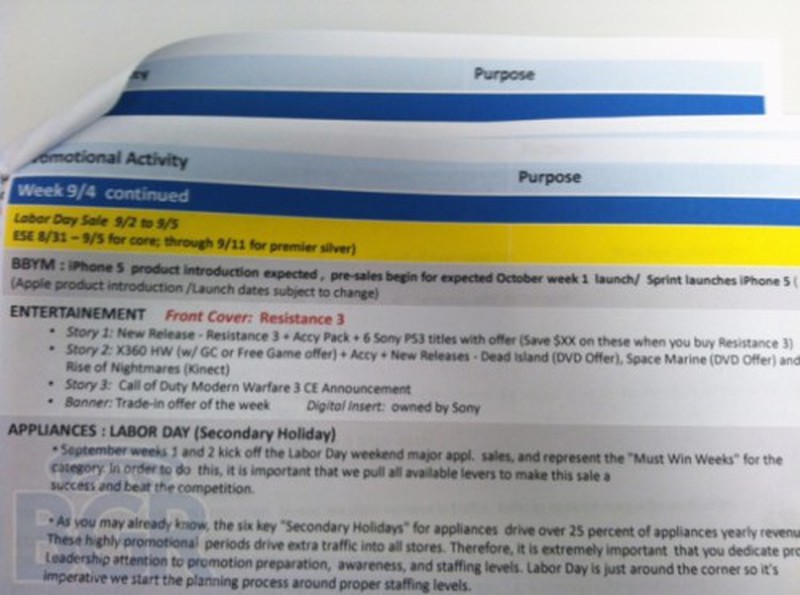 Though this could likely be Best Buy reading the same rumors as the rest of us, the company is anticipating that the iPhone 5 will be available for pre-order during the first week of October. BGR points to an internal memo:

Thanks to a leaked document from a Best Buy source, we have discovered that Best Buy and Best Buy Mobile stores are anticipating taking preorders for the iPhone 5 starting in the first week of October. What’s a tad bit more interesting, however, is the mention (and further anticipation) that Sprint will be carrying the iPhone 5 at launch.

Best Buy warns, of course, that dates may change. A report that Sprint will also be carrying the iPhone 5 was recently revealed by the Wall Street Journal.

To be clear, this isn’t a run-of-the-mill installation for the big box — our tipster tells us that the request that a manager be on-hand at 6AM is out of the ordinary (they usually show up at 7AM for inventory), and that a similar arrangement was scheduled for the iPhone 4 launch.

The new fixture could represent signs and displays for the iPhone 5 which has been rumored to launch at some point in October.

It'll really take the wind out of Android's sails.

A large portion of Android's growth is being driven by the race to the bottom, more specifically inexpensive handsets being deployed in Southeast Asia. It has been surmised elsewhere that many of these users aren't really treating the handsets as smartphones, but are pretty much using them as touchscreen feature phones, just making phone calls and texting, with little use in the typical smartphone manner (surfing the Internet, downloading apps, playing games, etc.).

Of course, these users don't really help out Google much (since they're not looking at ads), nor do they influence the Android developers (since they're not downloading apps). They're mostly allowing the handset manufacturers to continue their pattern of selling relatively inexpensive devices with low margins to the bottom end of the cellphone market.
Score: 14 Votes (Like | Disagree)

How do you spell "EntertainEment"?

Does BB not proof their material? Or is the image a fake, composed by someone who cannot spell?
Score: 9 Votes (Like | Disagree)

noverflow
The interesting thing here is that sprint could actually gain a lot of users if they keep their plans at the same level.

snebes
Still holding out hope for a contract-free US iPhone 5 at launch...
Score: 8 Votes (Like | Disagree)

I don't care about the iPhone 5, tell me about the Mac Pro...this is "MacRumors" not "iPhoneRumors"...

Sorry, this site was started before Apple sold iPhones; the site operators chose to keep the same domain name, despite Apple's changing focus.

Frankly, Apple would still just be a niche PC maker if they hadn't introduced the iPhone. Telephones now comprise well over half of Apple's revenue and has catapulted them to the company with the second-highest market capitalization and has generated billions in cash.

You need to accept the fact that the iPhone is a large part of Apple's current success today and some of that innovation and supply chain leverage is now migrating into the Mac product line.

Macs are probably about 35-40% of Apple's total revenue and over two-thirds of that PC revenue is from notebook computers. The Mac Pro is a specialty product which is why Apple is fine to let the design linger on for a long time before updating.
Score: 7 Votes (Like | Disagree)

100% they aren't doing pre-orders this week. Apple has not only not announced that a new phone exists, but hasn't even announced the day when they would announce that such a phone does exist.

At this point, the announcement won't be made for AT LEAST another week, as they have to send out invites and all of that. So, don't expect pre-sales to start for another 2 weeks, at the very least. This probably won't happen until the end of the month, I'm thinking.


You do know that Apple has sent out invites the week of an event, right? They could do it tomorrow. But doing it Labor Day week is bad and, in terms of the US, going into the 10th anniversary weekend of 9/11 when news of the new iPhone would be lost won't work out well.