Apple's blitz of retail store openings continues this week, with ifoAppleStore reporting that the company is set to open three new stores in three different countries this Saturday. The openings come after Apple opened five new stores this past weekend as part of a push to open over 30 new stores between July and September.

The stores opening this week include a new location in Berkeley, California, as well as locations in Leganés, Spain near Madrid and Basingstoke, United Kingdom. 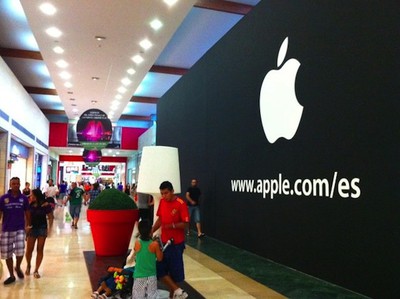 Apple's Parquesur retail store under construction in Leganés, Spain (Source: Applesfera)
- 4th Street (Berkeley, California): The latest of more than a dozen stores in the San Francisco Bay Area, the new Berkeley store is just three miles from Apple's Bay Street store in nearby Emeryville and is about 2.5 miles from the University of California, Berkeley.

- Parquesur (Leganés, Spain): Located in a large suburb southwest of Madrid, the store will be Apple's second in the Madrid area and third in Spain. The store is actually closer to central Madrid than the existing Xanadu store.

In the wake of the new Apple Store opening at Basingstoke's Festival Place, the existing Apple Premium Retailer 'iStore' (located directly opposite Starbucks on the top floor) is being forced to close. An employee of iStore Basingstoke made it clear that this was because of threatened legal action by Apple prior to the opening of the official Apple Store. This has not been confirmed by anyone in management at iStore, however even if Apple had not started supposed legal action against them, iStore would have found it increasingly difficult to compete with the official store on a pricing standpoint.

At least until this Saturday just gone, the iStore was still open however listed as 'closing down'. Pop in before this Saturday to find out if they're still there and to possibly grab yourself a cheap bargain from their clearance and ex-display range.

From now on, the nearest iStore to Basingstoke will be located at the Peacock Centre, Woking.
Score: 1 Votes (Like | Disagree)

This is ours here in Cardiff
Score: 1 Votes (Like | Disagree)

I'm surprised about the Basingstoke store - it's under 2 months since they opened a store under 15 miles away in Reading. It's a bit like the London buses cliche - you wait ages for one to come along and then two come along in quick succession.

I think Basingstoke had a third party Apple store already, and the Southampton store is only 30 minutes down the Motorway, so what with the Reading store as well it seems an odd choice.

I'm not complaining because both Reading and Basingstoke are handy for me, but I am sure there are other areas more in need of a store.


Funny, because I was in Basingstoke yesterday and surprised to see an "Opening soon" board up where the Apple store is going to be. In the window of what was the "Apple premium reseller" was a rather touching farewell and thankyou note to Basingstoke citing "Circumstances out of our control" as the reason for closing down. It also mentioned that Woking was now the nearest reseller (like anyone's going there with Apple opening their own store). Looks like another case of David and Goliath. The small players who helped Apple build their market are now being ungratefully driven out of business....

TBH I can't really see why Basingstoke needs and Apple store. Its hardly a wealthy demographic.
Score: 1 Votes (Like | Disagree)

Rightway
Are they sure this is Spain? These people certainly aren't.
Score: 1 Votes (Like | Disagree)

7o7munoz7o7
That is a strange place to put on in Berkley....we need one near UC Davis!!!
Score: 1 Votes (Like | Disagree)
Read All Comments

Sunday August 1, 2021 6:21 am PDT by Sami Fathi
Models of the Apple Watch Series 6 with titanium cases part of the "Apple Watch Edition" collection is currently widely unavailable for pick-up in several of Apple's retail stores in the United States and is unavailable entirely for delivery in major markets. Noted by Bloomberg's Mark Gurman in the latest edition of his "Power On" newsletter, titanium models of the Apple Watch Series 6,...
Read Full Article • 142 comments