Last week, Apple made news with its victory over Samsung that saw courts issue a preliminary injunction barring Samsung from selling the Galaxy Tab 10.1 anywhere in the European Union except the Netherlands following an infringement complaint filed by Apple over the Galaxy Tab's design.

Computerworld now reports, however, that an investigation by its Dutch affiliate Webwereld.nl has discovered [Google translation] a significant flaw in a key piece of evidence used by Apple in the case. According to the report, a key exhibit comparing the appearance of the iPad 2 to the Galaxy Tab 10.1 utilizes an inaccurate or distorted image of the Galaxy Tab 10.1 that makes it seem more similar in appearance to the iPad 2 than it actually is. 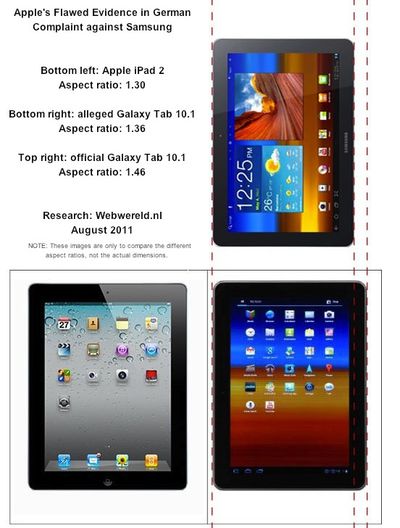 Photographic evidence submitted by Apple, found on page 28 of the German complaint, shows two pictures: the iPad 2 and the alleged Galaxy Tab 10.1, accompanied by Apple's claim that the "overall appearance" of two products is "practically identical."

But the picture Apple submitted of the Tab is inaccurate and does not match the real Galaxy Tab 10.1, Webwereld discovered. Further investigations have verified this assessment. The Galaxy Tab due on the European market is taller and more oblong than the iPad 2. However, the shape of what Apple claims to be a Tab 10.1 resembles the iPad very closely.

The inaccuracy is of key importance due to the fact that Apple's case centers on the Galaxy Tab's design being "practically identical" to the iPad, and any misleading evidence presented to support that stance could considerably damage Apple's case.

It is unclear whether the image has actually been intentionally manipulated to make the Galaxy Tab 10.1 appear more similar to the iPad, as some sources have suggested that Apple may have utilized an image of an early Galaxy Tab 10.1 prototype. Regardless of whether the image is obsolete or doctored, the German court responsible for the injunction is not likely to take kindly to the error when a full hearing on the matter is conducted beginning on August 25th.

Update: As John at Edible Apple and others have pointed out, Apple's evidentiary submission is not limited to the inaccurate comparison photo, as Apple did also offer a number of other exhibits in support of its case, including some showing actual side-by-side photos of the iPad 2 and Galaxy Tab 10.1 rather than just promotional images. Consequently, it stands to reason that the judge's decision was not based entirely on the flawed comparison, although the inclusion of inaccurate information in Apple's submission certainly is a curious one.

However, the shape of what Apple claims to be a Tab 10.1 resembles the iPad very closely.


Well obviously Apple has the patent rights to "quadrilaterals."
Score: 28 Votes (Like | Disagree)

KnightWRX
Ok, I gotta admit I was wrong here, the nice people at Macrumors did post this as news, on the front page no less. :eek:

This will be especially harmful to Apple because the injunction was granted based on Apple's complaint alone, Samsung having had no chance to reply or file opposition and the judge not doing a hearing.
Score: 28 Votes (Like | Disagree)

ConceptVBS
I'm more shocked that MacRumors would post a news that would potentially hurt Apple. :eek:

I applaud you MacRumor editors for your professional journalism.

Well deserved. You guys are above others in the world of Mac news reporting.
Score: 26 Votes (Like | Disagree)

If they have knowingly altered the photos to look more like the iPad then they could be in big trouble.
Score: 22 Votes (Like | Disagree)
Read All Comments