Wal-Mart today announced the debut of its VUDU video rental and purchase service for the iPad, avoiding Apple's required 30% cut of revenue for app-based content purchases by launching as a web app.

Beginning today, iPad users can go to VUDU.com and browse through VUDU’s entertainment content library, which includes more than 20,000 blockbusters, Hollywood classics, independent films and TV episodes, then rent or purchase and watch them instantly. For one touch access to VUDU, customers can add a VUDU icon to their iPad desktops by clicking the “Add to Home Screen” button when on VUDU.com.

VUDU's service is limited to standard definition and omits some titles such as those from Disney, but has proven to be a popular option for those looking for on-demand streaming, particularly for new releases not available through Netflix. 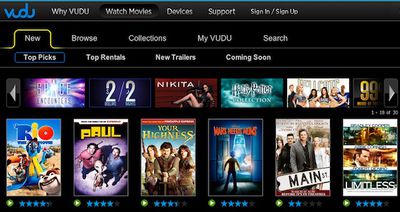 On a separate note, Digital Music News reports that Wal-Mart has also announced to its music partners that it will be shutting down its MP3 download store later this month. From the letter sent to Wal-Mart's distribution and licensing partners:

After eight years in business, the Walmart Music Downloads Store located at mp3.walmart.com will close on August 28, 2011. All content in the Store will be disabled and no longer available for download from the store.

"The sale of physical record music products on Walmart.com as well as in Walmart US retail stores will remain unaffected. Walmart Soundcheck (soundcheck.walmart.com) will remain operational as a live streaming site without any download options."

Wal-Mart notes that it will continue to provide support to customers who purchased tracks through the download store, but content will no longer be available for sale. The download store has been in existence since late 2003, but has had little success eating into the iTunes Store's dominance in the digital music download market.

… avoiding Apple's required 30% cut of revenue for app-based content purchases by launching as a web app.

Hmm… I think I see a pattern emerging here…
Score: 6 Votes (Like | Disagree)

Who the h^&% is dumb enough to watch a movie on that little screen? I think the iPad is a terrific substitute for a PC in a lot of situations, but you cannot make up for that puny, little screen. Can you??


Youre so right! I was watching a TV series in bed the other night, thinking, what an idiot! I should move the TV in here! Or maybe awkwardly hold up a laptop, to give my arms a decent workout and generate some soothing summer heat. And yesterday, out on the porch, I was so dumb tooI could have simply run an extension cord out there and had any size screen I wanted! Later on, I was bored at a friends house waiting for them to get ready to leave. Why did I keep watching the show during that wasted time, when I could have waited until I got home? And dont get me started on my foolishness when someone else is watching something on the big screen, and I want to watch something else in a quieter room of my choosing. And to think I used to do these things sometimes on my little iPhone before I had an iPad! I suppose its possible that a small screen held in your lap fills your view the same as a giant screen far away... but the math escapes my walnut brain.

Having a 10 inch screen right in front of you is basically the same as sitting across the room from a 40-50 inch screen. Movies work quite nice on the iPad.

Unrelated: It's about time companies started embracing some web apps. Apple (well, Jobs) said that for native Apps everything must go through our store and play by our rules BUT that is only one of two "stores" on our devices. The other is the web, web apps (porn being a "bad" example) and the web is not regulated by Apple. You can't even block sites with parental controls (pron again heh). This is what they wanted. 2 stores, one with total freedom and one with tight control. You don't have to use one over the other or you can use both like Kindle. It's the best of both worlds.

Agreed, and this second iOS platform—web apps—is not some workaround or way to spite Apple: it has Apple’s full support. In fact, Apple has made mobile Safari in many ways a better web app platform than Google has with their own mobile browsers. Apple has pushed more quickly than Google to bring web app users things like accelerometer support, offline installation on your home screen, and other things that help a web app compete with a native app. Why is Apple doing so much more than others to make web apps great, if they don’t want that option to thrive? People love to parrot “Apple = closed,” but the reality isn’t so simple. And I’m glad.

I hope more companies go this route. Getting 30% cut from App sale is one thing, but for content they do not produce or host such as movies, as it's streamed, they do not deserve any percentage.

Apple provides very valuable service even in those cases: they bring the customers, with existing accounts, credit cards, and trust in the iTunes system; they handle the financial transactions, as well as customer service relating to those transactions; they build and maintain the online store where the “free” player is promoted and discovered; they host the app (storage, power, insurance, staff, bandwidth) and all future updates, including automatically pushing out app updates to all users, which is of grear value to the media company, not just the users. None of that is free for Apple to design, build, test, or operate.

Now, you can certainly argue specific numbers, and 30% sounds high to me, from my armchair here. I hope (and assume) these negotiations haven’t entirely ceased.
Score: 4 Votes (Like | Disagree)

FrizzleFryBen
As a firm believer that Wal-Mart is an evil destructive company, I hope they fail at every expansion attempt.
Score: 4 Votes (Like | Disagree)
Read All Comments

Friday December 3, 2021 7:10 am PST by Hartley Charlton
Apple's AirTags are being used in an increasing number of targeted car thefts in Canada, according to local police. Outlined in a news release from York Regional Police, investigators have identified a new method being used by thieves to track down and steal high-end vehicles that takes advantage of the AirTag's location tracking capabilities. While the method of stealing the cars is largely ...
Read Full Article • 198 comments