The new Airport Extreme and Time Capsule released by Apple in June didn't have an advertised upgrade, outside of a capacity bump on the Time Capsule. However, Brian Klug at AnandTech has written an extraordinarily detailed review of the new devices and found they are notably improved from the prior generation. 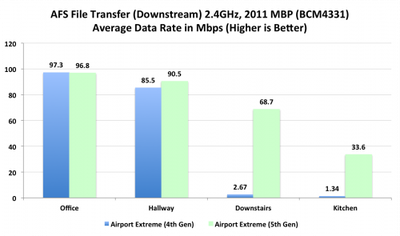 Klug notes that the new devices are virtually indistinguishable from their older counterparts, but in detailed testing, they found increased throughput and range.

At the end of the day, the new Airport Extreme dramatically improves throughput in the best case and in a few regions where signal was previously unusable. In the worst case (location 4), performance improves from being essentially unusable to totally fine, and in the case of the 2010MBP goes from not being able to connect at all to pushing 23 Mbps.

The main improvements with AFS (real-world file transfer) happen out at the extremes where previously signal was unusable on 2.4GHz, and likewise on 5GHz. That really tells the story of the (sometimes dramatic) difference that the higher power WLAN solution in the 5th generation makes over the 4th generation.

The highest speeds are attained with the 2011 generation MacBook Pro which includes an upgraded "three spatial stream compliant WLAN stack", which basically is next-generation wireless software and hardware.

The new Airport Extreme includes a slightly different chipset as well, moving from one sourced from Marvell to one from Broadcom:

The result of the move from Marvell to Broadcom is twofold. First, performance and range is definitely better thanks to more transmit power and the improved sensitivity afforded by newer generation chipsets. Second, the combination of lots of Broadcom in Apple’s hardware lineup (from the iPhone, iPad, and MacBooks, to iMac and Mac Mini) with Broadcom in the access point likely allows for the use of frame bursting or some other packet aggregation technique that speeds things up in some scenarios. It’s another example of how having that complete hardware control can in fact result in some benefit—in this case, faster WiFi.

Klug finishes the review by noting the Airport Extreme is reasonably priced compared to the competition and he prefers it due to it "actually work[ing] without locking up, becoming unstable periodically, dropping the session from overheating when being pushed to 100% for hours, or requiring a daily reboot."

toddybody
What he forgot to leave out is that he got a new house.
Score: 15 Votes (Like | Disagree)

Ugh why do they always use stupid names like "Airport Extreme"?

Just call it a Wireless 802.11N Router and be done with it. Also who would actually buy a router from Apple? Get an Asus rt-n16.

The router you mentioned doesn't support simultaneous dual-band, nor does it seem to support dual-band in the first place... 2.4ghz band only. You really think that router is somehow better than the extreme? You seriously have no idea what you're missing my friend.
Score: 11 Votes (Like | Disagree)

lordmac
I wish it was easier to fully explain the nuances of wifi technology like this to the technology inept. I am a salesperson at a computer store and if there is one apple product that people balk at the price of more then any other its the airports. People think the endless number of $40 to $60 routers from Linksys, netgear, belken, etc are the same level of product. As far as they are concern 802.11n is better then 802.11b/g and thats about as far as they care and then they complain they have to restart their routers all the time or that their internet is slow.
Score: 10 Votes (Like | Disagree)

I heard apple routers have problems with xboxs and stuff like that. Can anyone that has one confirm or deny?

We have a new (current gen) AirportExtreme, and we run two XBox 360s off of it with no problems.

Also, two SmartTVs, two blu-ray players, an iMac, a MacBook Pro, two iPhones, an iPad, an iPod Touch, and two Windows laptops, and a Wii. We even have an old first generation AirportExtreme running as a wireless bridge connected to it.

Just last week I tried to "skimp" by buying a Linksys for $50 less than the new AE but I just couldn't get it configured to work with my UVerse. After a full day, I gave up and bit the bullet and bought the new AE. I plugged it in, set up the dual band network, set my other AE into bridge mode, and everything just worked like butter.

I don't know why I bothered, after all that was how I got to the AirportExtreme in the first place. Years ago I was uber cheap, so I always bought the cheapest. I had Linksys, Buffalo, ActionTec, you name it. They would all die, lock up, reset, or cause problems. Over and over, I pulled my hair out... I gave up fighting, and paid the extra for the AE which plugged in and worked from day one, never needing a reboot or a reset. After all these years I guess I forgot that lesson, and tried again. I went on consumer review sites and tried to find the best non-apple router I could find. I read and read, and picked one with high reviews which was supposedly a robust "pro" model with lots of power and features. Nope - still caused me hassle.

Sure, maybe I am a fanboy. But these Airport Express routers are *worth every penny* in my book.
Score: 7 Votes (Like | Disagree)

Also who would actually buy a router from Apple? Get an Asus rt-n16.