Lion USB Keys Available For Some via AppleCare 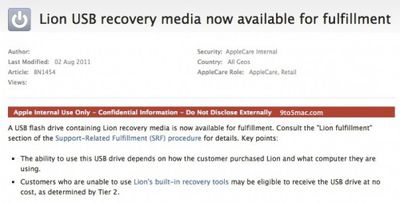 Lion USB flash drives are available for customers who are unable to use Lion's built-in recovery tools, according to an internal AppleCare document obtained by 9to5Mac. The document notes that "the ability to use this USB drive depends on how the customer purchased Lion and what computer they are using." The document doesn't go into any further detail, but it could be that new Macs with the Internet Recovery feature don't require the USB drive.

Further, these drives aren't necessarily the same as the thumb drives Apple plans to put on sale sometime this month for $69. Those USB drives aren't available yet.

However, for customers who are having difficulty with their Lion installations, a visit to an Apple Store or a call to 800-APL-CARE may be helpful.

It is also possible to make a bootable Lion installer on a DVD or on a USB flash drive using a small AppleScript application to automate the process. Some recommend the flash drive instead of the DVD, as it reportedly is much faster to install the OS in that manner.

vartanarsen
Why would anyone pay $69 for a Lion USB when they can burn the Lion Intsaller from Disk Utility in Snow Leopard after downloading but not installing Lion from the MacApp Store?
DVD cost $1
Score: 3 Votes (Like | Disagree)

res1233
So... Delete the recovery partition and get a free USB key? Sweet.
Score: 3 Votes (Like | Disagree)

Actually, that's not a bug and has been pretty standard (http://support.apple.com/kb/HT2186) as far back as I can recall.

So you fubar your computer and got a new replacement. I guess it could be worse. A few years ago, a friend ordered a Dell that didn't work out of the box. After the better part of a day talking to tech support rep that barely spoke English, they blamed her keyboard. They sent her a replacement, but it didn't resolve the problem. To make matters worse, they charged her for the keyboard! More excruciating hours talking to someone in an overseas call center, and they deduced it was something with the motherboard. Their resolution? Send her a refurb computer. Classy. I wonder if she got one of these (http://www.nytimes.com/2010/06/29/technology/29dell.html?hpw&pagewanted=all)?


A support doc like that has never stopped power users trying things and being successful. I was able to do it with Tiger years back. However, the main point of contention here is that I should have been able to reinstall Lion using my own USB install drive. You must have skipped over that part... Please tell me how this is downgrading my OS!

Besides, a computer should not be rendered "fu**ed up beyond all recognition" after simply erasing the drive! Neither should it be completely useless after replacing/upgrading to a new drive. The point i was making was that if you have a system in place to restore an OS, in this case your machine contacts Apple's servers over the network and downloads a boot environment prior to the full OS, that system should work. Clearly, it is not working for a number of people.

Your refer to those dodgy DELL computers and the experience of your friend but how many times have you spoken with an AppleCare rep whose native language is not English. My experience just the other day was with someone whom I found it difficult to understand. That certainly wasn't the first time that has happened to me.

I don't want to sound disrespectful here towards your friend but NO WAY would I accept refurbished for new, or having to pay for a faulty keyboard. I would not have been mugged like that! I would have been quoting the Sale of Goods Act and Distance Selling Regulations at them so I'm not sure why your friend accepted service like that... :confused:

You won't have to rely on the internet every time you reinstall, if you use the recovery HD, unless you wipe the HD. In my experience once you've downloaded the additional components on the MBA, they're there for good (on the main partition, not the recovery HD) but I totally agree with you anyway. It took me five attempts to restore my MBA (on a good connection!) and I still can't reinstall Lion on my iMac due to it timing out on the downloads. Might have to see if I can get the USB stick in the UK for the iMac.

Le sigh. You'd think with all the $$ we are paying the least they could do is allow us to create our own bootable media with custom builds for our hardware. :mad:
Score: 2 Votes (Like | Disagree)

Doctor Q
A word to the wise: Be aware that the AppleScript erases anything that was previously on the target drive.
Score: 2 Votes (Like | Disagree)

aznrmx1112
This would be cool for those of us who are having recovery problems. Save $69 FTW!
Score: 2 Votes (Like | Disagree)
Read All Comments