The New York Post reports that Apple and the Metropolitan Transportation Authority (MTA) have signed a deal to bring a 23,000 square-foot Apple retail store to Manhattan's historic Grand Central Terminal. The initial ten-year deal will reportedly see Apple paying $800,000 per year in rent, and potential extensions after the ten-year period would see the annual rent increase to over $1 million.

Tech giant Apple has inked a 10-year deal with the MTA to open its largest store in the world in Grand Central Terminal.

Apple will initially pay rent of $800,000 a year, nearly half a million more than Metrazur paid.

The MTA's financial committee is said to be set to add the final seal of approval to the deal today.

The report's claim regarding the store being Apple's largest in the world is a bit fuzzy, as Apple's Regent Street store in London is said to check in at approximately 25,000 square feet. It is a bit difficult to make strict comparisons, however, as different reports use differing standards for reporting square footage. Some reports may refer to gross square footage while others may use the smaller assignable square footage, while some reports may count only publicly-accessible retail floor space in contrast to others that may include back-of-house support space or even regional corporate offices occasionally located on-site at flagship retail store locations.

Update: In an article on the MTA's board meeting today regarding the deal, The Wall Street Journal includes a pair of renderings showing what visitors can expect, with Apple's traditional light wood tables and black stools appearing under the soaring ceiling and stone work of Grand Central Terminal. Apple is paying current tenant Metrazur $5 million to vacate its spot eight years before its lease was to run out, and the company will begin construction immediately with a goal of opening the new store four months from now. 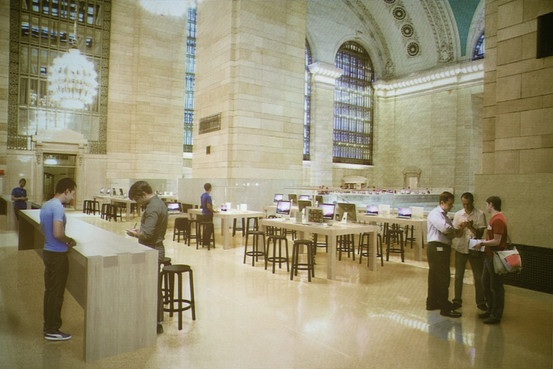 800k a year? I know there's some factors that take into account like brand exposure but isn't that too much? Obviously a study was made and probably is money well spend.


Trust me, this store will probably make $1 million/week. And if you think I'm lying, look at Apple's latest quarterly earnings then, look at home much the retail sector brought in, then divide that among the number of currently open Apple Stores. Ya, easily $1 million/week. And after rent, paying employees, etc., this could easily be the most profitable Apple retail store yet.
Rating: 2 Votes

shartypants
Would love to see it when its done!
Rating: 2 Votes

This morning I noticed that the restaurant was shut down. There is a sign that says "Pardon the mess. We are working on a new shopping experience" or something of that nature. Wasn't able to take pic, but when the Apple signs show up, I will!
Rating: 2 Votes

iPadPublisher
I have no doubts this store will make a ton of money. Kind of like an airport location, they'll make a killing with the traffic in there. How convenient on your daily grind to swing in, get the replacement headphones you wanted, or finally check out an iPad, etc. This is a largely car-less group of people going through here -- putting a store right in their daily path exposes many many more people to the products.
Rating: 1 Votes

Doctor Q
Now that all of the brick and mortar bookstores are going out of business, this will be best place in town to relax and surf the web.

Who knows, perhaps you might even buy stuff from Apple now and then.
Rating: 1 Votes

stridemat
Pah! When is an Apple store ever that empty.
Rating: 1 Votes

Apple needs to expand their retail space in the Galleria Mall in Houston. Went their over the weekend and that place was a zoo and definitely smaller then I remember.

We have three Apple stores within five miles of each other (all on the same road). Last week I had to visit all three to find a camera connection kit and all three stores were packed. (I would get to the store before my call to check stock was even answered.)

I doubt the store will cause a noticeable increase in GCT traffic. Even if 10,000 people a day came just for the store it would be a drop in Grand Central's foot traffic bucket. ;)
Rating: 1 Votes

fabian9
So it'll be ready just in time for the christmas shopping period. Perfect timing!
Rating: 1 Votes
[ Read All Comments ]