DigiTimes reports that Apple is off to an aggressive start with its new MacBook Air models, having already pushed out 400,000-500,000 units in June and continuing with strong production through at least the end of August. Sources within Apple's supply chain also indicate that Apple is shooting for total notebook shipments of 13-14 million in 2011, with the possibility of hitting 15 million units.

Shipments of Apple's just released third-generation MacBook Air from the supply chain already reached 400,000-500,000 units in June and the volume is expected to remain strong throughout July and August, according to sources from Apple's upstream supply chain.

The sources estimated that Apple's MacBook series sales will reach 13-14 million units in 2011 and may even reach 15 million units, while adding that Apple is the only vendor that has provided a full shipments forecast to the first quarter of 2012 as the IT industry is being rather conservative about the overall demand in the second half of 2011.

Apple shipped 2.75 million notebooks during the first calendar quarter of 2011, and followed that up with 2.79 million in the second quarter as announced on Tuesday, putting Apple's total notebook shipments at roughly 5.55 million for the first half of the year. Consequently, it would take a very significant acceleration in shipments for Apple to push toward that 15 million mark by the end of the year, although the company's back-to-school and holiday shopping seasons remain ahead of it and the new MacBook Airs are likely to drive further sales growth. 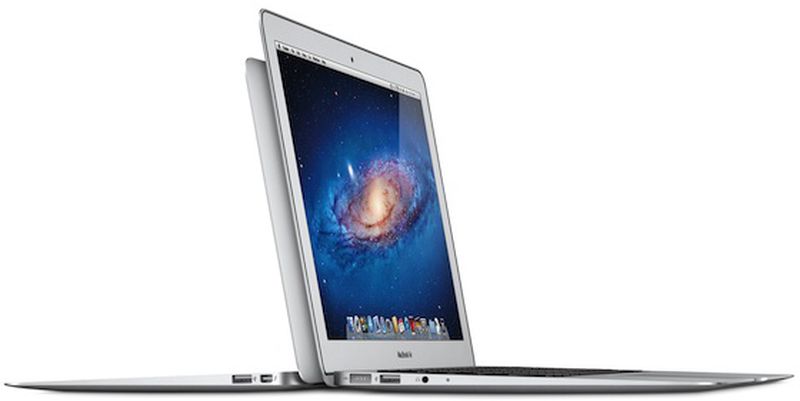 Last year, Apple shipped 3.9 million notebooks in the first half of the year and boosted that rate by 30% in the second half of the year to 5.1 million notebooks, for a total of just over 9 million notebooks shipped in 2010. If Apple was to again boost its notebook shipments by 30% from the first half to the second half of this year, it would reach approximately 12.75 million units for 2011. So, Apple would need to have "back half" unit growth of 35-55% to hit this year's full-year target range and more like 70% growth to reach the full 15 million units.

King Flamez1
lol most companies have trouble designing products customers would buy, Apple has trouble keeping up with it's awesomeness
Rating: 11 Votes

my only beef of the current macbook air, is that they did not up the GPU. Yeah the new one can perform slightly better than the 320m. But I wanted something better. the new processor is great, along with everything else. But that was the deal breaker for me.


The MBA is not a MacBook Pro, AFAIK. So what do you expect? How do you cool a high performance GPU in a MBA?

I do believe these slim laptops are the future, Intel also talked about slim laptops being the future. But until they beat the previous generation, I do not yet want one.


They beat the previous generation. It is not our fault, that you ignore the published benchmarks.
Rating: 6 Votes

*LTD*
Truly an impressive product. It has been imitated by others with zero success. Can't touch it.
Rating: 5 Votes

DerApfel
I'm still mourning for the polycarbonate MacBook (I know it was the ugly stepchild of OS X but it was just perfect for the average college student).

I'll stop whining, though. The MBA + Thunderbolt Display combo is pretty rad and where I'm heading in September.
Rating: 3 Votes

AAPLaday
The MBA is the best notebook in the world
Rating: 3 Votes

I’m in a self-imposed waiting period before letting my credit card out to play, and when I do, I won’t want to wait :)

I love the size/weight (I’d never go back to bulkmonster laptops) and the Core i5/i7, but I’m most looking forward to the SSD performance. Down with spinning platters!

I still can’t believe Apple can sell an ultracompact this cheap with these specs. I went to Dell to try to configure something similar, and it was WAY more expensive—and much bulkier, and made of creaky plastic. And it was the best I could get. (An 11” Alienware + SSD, to be precise. The specs were still not a match; each had some benefits: better gaming GPU on the AW, better trackpad and Thunderbolt on the Air, etc. But getting anywhere near an Air from other companies seems to cost through the roof, even if you don’t add any software bundle to match Apple’s, and even if you think Windows is truly a value match for Lion. How do people pay that non-Mac tax?)
Rating: 2 Votes

I'm still mourning for the polycarbonate MacBook (I know it was the ugly stepchild of OS X but it was just perfect for the average college student).

I'll stop whining, though. The MBA + Thunderbolt Display combo is pretty rad and where I'm heading in September.


its heartbreaking, i bought one as my first apple machine. its not like i was going to buy another one (i need a big screen and more performance for animation) but i was hoping they would either keep it around or do a redesign
Rating: 1 Votes

dawnrazor
Ordered my 1.8Ghz 13" yesterday - it's say it'll deliver August 01 :eek: and it hasn't shipped yet either - I'm hoping that this is Apple's optimistic delivery dates, and that I'll get it mid next week instead, now I must go off and buy a 13" neoprene sleeve to keep it safe and sound...
Rating: 1 Votes

DTphonehome
I think 15 mil might be a bit optimistic. Still, I really think that the laptop market is where apple is going to grow fastest next. It will drive growth for the next year or so, much as the iPad did over the last year. The MBA is such a good value, and there really is no competition in that price bracket. Amazing how it evolved from a niche "ultraportable" (but underpowered) machine on it's debut, to a high-powered, reasonably priced everyman's computer. Apple astounds me.
Rating: 1 Votes

John.B
I just got back from the Apple Store. The only reason I didn't pick up a new 13" MBA today is that I'm waiting for the Macworld lab report between the 1.7GHz i5 vs. the 1.8GHz i7.

BTW, the Apple Stores are stocking the "ultimate" i7 version and had them on hand in addition to the two stock i5 models. I was surprised it wasn't a CTO online-only option. The only 13" MBA out of stock at noon today was the cheapest $1299 version w/ 128GB SSD.

These things are going to literally fly off the shelves. :cool:
Rating: 1 Votes
[ Read All Comments ]