Apple today released an update to its Mac mini line, bringing Intel's Sandy Bridge platform to the diminutive desktop computer along with new support for the Thunderbolt connectivity standard being pushed by Apple and Intel. The new Mac mini lineup consists of two standard stock configurations alongside a "server" model. Notably, all models drop the optical disc in favor of an optional external SuperDrive.

Additional build-to-order options include an upgrade to 8 GB of RAM, up to 750 GB hard drives, and an external SuperDrive. The high-end standard model and the server model can also be configured with one (standard) or two (server) 256 GB solid-state drives.

The new Mac mini delivers up to twice the processor and graphics performance of the previous generation in the same amazingly compact and efficient aluminum design.* Starting at just $599 (US), the new Mac mini is available for order today and in stores tomorrow.

“Mac mini delivers the speed and expandability that makes it perfect for the desktop, living room or office,” said Philip Schiller, Apple’s senior vice president of Worldwide Product Marketing. “With faster processors, more powerful graphics and Thunderbolt in an incredibly compact, aluminum design, the new Mac mini is more versatile than ever.” 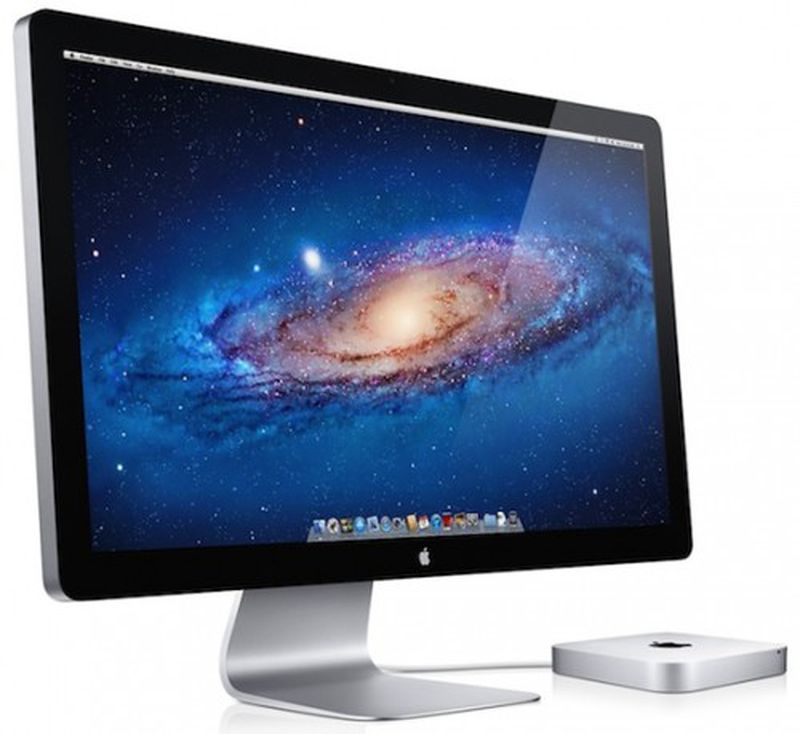 Alongside the new Mac mini models, Apple also announced a new Apple Thunderbolt Display. Appearing nearly identical to the previous 27-inch LED Cinema Display, the primary upgrade to Apple's sole standalone display offering is Thunderbolt compatibility, enabling the device to be used within daisy-chained configurations of the new high-speed data and display connectivity standard. With the new standard, users can for the first time run two displays off of a single Thunderbolt port on Macs offering enough graphics horsepower to support the pixel load.

“The Apple Thunderbolt Display is the ultimate docking station for your Mac notebook,” said Philip Schiller, Apple’s senior vice president of Worldwide Product Marketing.” With just one cable, users can dock with their new display and connect to high performance peripherals, network connections and audio devices.”

Images of the new Thunderbolt-enabled LED Cinema Display leaked on Apple's site late last week, foreshadowing their arrival alongside the Mac minis that do not ship with an included display. The new LED Cinema Display will be available within the next 60 days and is priced at $999.

Vantage Point
It's 2011!!! I think Apple should pony an extra $10 and put 4GB of RAM in the Mini base model, not 2GB - that's is ridiculous and a bit of a insult to buyers that that much for computer
Rating: 23 Votes

SkippyThorson
Dropping the optical disc drive on the Mini is possibly the most bonehead move I've ever seen Apple do. I have to say, considering this is widely regarded as the "switcher machine", I don't understand the logic even more.

I don't know about you, but the Windows users I know are all about physical media consumption. Now I've gone from explaining "Macs don't do games because..." to "Macs don't have CD drives because..." Do you know how many people are going to laugh at that statement?

I feel that this is just Apple's price increase to the Mini without actually increasing the price of the Mini. It had a $100 price hike not too long ago, and now (something as primitive as) using CDs / DVDs will cost you an extra $100 for an external device. Absurd.

Furthermore, Apple is All about eliminating clutter - how is having to have an external drive eliminating clutter? If anything, the Mini is all about simplicity. Having one more thing on the desk is not a selling point. Having one built in is. Only a select few Mac lovers / longtime users won't mind the lack of a drive. Even some who aren't still won't mind. The majority however, will spring for an external optical drive. I now consider the Mini's base price to be $699...

Guess what that optical drive is coming out of next. That iMac sure looks like it could trim some fat. Now, I've actually wanted that to be horizontal since the death of the iMac G4. That, I'll welcome. It had just better accompany a $100 price drop or a free bundle into the box.

"Mac mini is designed without an optical disc drive. Because these days, you don’t need one. It’s easier than ever to download music and films from the iTunes Store. And you can download apps from the Mac App Store with a click."

LOOOOOOOOOOOOOOOOOOOOL... Yeah, right Apple. The Mac Mini is a 'hub' with HDMI, yet it can't even play DVD's? Rip CD's? And whats the point of having Boot Camp when you can't use a Windows disc?


Looks like most users don't agree, but I do. My thoughts exactly.
Rating: 22 Votes

"Mac mini is designed without an optical disc drive. Because these days, you dont need one. Its easier than ever to download music and films from the iTunes Store. And you can download apps from the Mac App Store with a click."


Heh, if I had a dollar every time someone used the phrase "Epic Fail" to Apple on MacRumors, my bank account would be Too Big To Fail.

Funny, one epic failure after another from Apple keeps leading to record sales.
Rating: 18 Votes

Are we sure about this ? The tech specs say there's only 1 Thunderbolt port :

How can you daisy chain them if there's no second port ?

It also has a built in thunderbolt cable, plus the port.

winston1236
i couldnt ever buy a mini based on performance anyway but no optical drive? it makes me think how many college textbooks are out there with a cd in the back. kind of making it hard for anyone with serious work to buy one apple
Rating: 15 Votes

Actually I'm happy to see the optical drive go, but SSD should have being standard.


Happy to see it go? Why? Did it insult you at some point or date your sister?

No drive is idiotic. You can't rip your CDs to it and use it as a music server. You can't run Windows 7 Media Center on it. It doesn't play DVDs.

Unless you pay another $70 and have another box sat on top of it. Which defeats it's compact design.

It hasn't been reduced in price, just flexibility.
Rating: 14 Votes

daneoni
Why get rid of the optical drive on a desktop/media computer :confused:. It's not like it didn't fit in the enclosure to begin with. I'm so glad i got a 2011 MBP. I think it's all but certain they'll be next in line for an ODD excision.
Rating: 14 Votes

Apple leads the way. The future is the cloud...


Not in the next ten years it isn't. As long as broadband is underpowered, limited in reach, overpriced and constrained by providers owning physical media is going to be around a long time.

Why do you need an optical drive? Answer: you don't. And if you do, the Mini is not targeted at you.


Some people still like to buy CDs, and now they have to pay extra for the privilege of ripping them.
Rating: 13 Votes