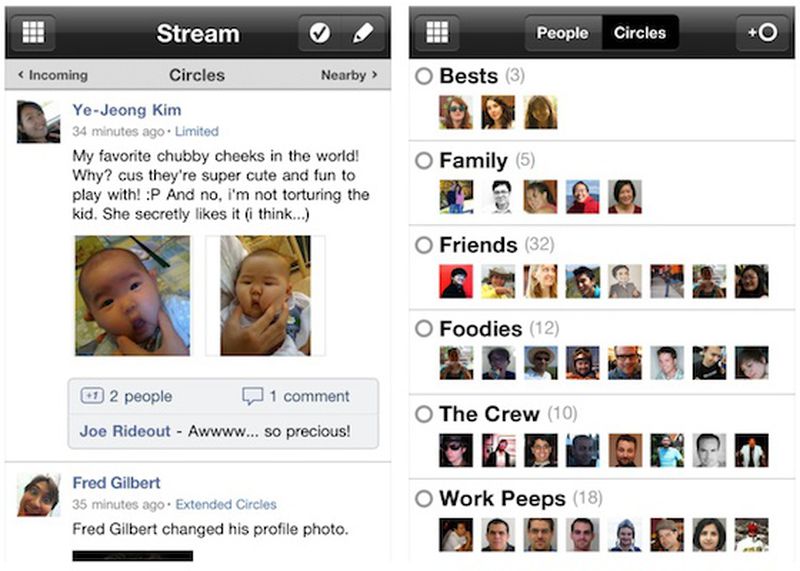 As noted by MacStories, the new Google+ app offering users a number of features related to the company's new social networking service has just gone live in the App Store.

Google+ for mobile makes sharing the right things with the right people a lot simpler. Huddle lets you send super-fast messages to the people you care about most. And no matter where you are, the stream lets you stay in the loop about what your friends are sharing and where they’re checking in.

Features:
* Circles let you share the right things with just the right people.
* Stream is where you can get updates from your circles or see what people are saying about things nearby.
* Huddle is super-fast group messaging for everyone in your circles.

Google+ is a free app designed for the iPhone. Google prefers that iPad users directly access Google+ via the web app available at google.com/+.

Update: Just two hours after its initial release, the Google+ app has already been updated, so those users who grabbed an early copy may want to make sure they check for updates to make sure they have the current version.


Why are you using beta firmware and complaining about compatibility? Seems absurd to do so.
Rating: 27 Votes

Wow! Growing quite fast. I remember hearing a few days or a week ago that in it's first 2 weeks Google+ reached 10M users. Pretty good for invite only.


I think people have been aching for a viable Facebook alternative for a while now.
Rating: 5 Votes

Does anyone even have Google+ yet? All I see are the reporters and tech bloggers having it. But no one I know has it yet.

And when listening to tech podcasts, they're all under the assumption that EVERYONE has it and have gone on to talk about tips and tricks and how people use it...when it still just seems to be some exclusive club of a few high-profile people.

It sounds great, but I'm sick of everyone in the tech-news world talking about it when it seems they're the only ones that have it.


Most MR members who want an invite have one now :)


What exactly is 2 factor authentication?

Its an extra security feature for Gmail and other Google products.

Blame Apple. The app has been awaiting approval for almost 3 weeks! Google has likely fixed the bugs in the latest iOS5 beta, but didn't want to keep waiting on Apple by submitting another version which they would have likely started the process all over again.


No, blame yourself for running beta software not intended for use by the public.
Rating: 5 Votes

djdeckster
Does anyone have any invites still left for Google+?
Rating: 5 Votes

I wasn't the one complaining, but if there is a complaint it needs to be directed at Apple for taking almost 3 weeks to turn around an app submission. This means that if iOS5 had been released in the last 3 weeks it wouldn't be beta and the app still wouldn't work.

"If Apple hadn't taken so long approving, AND Apple had released their now-beta OS two months early, it would be a problem!" Is that honestly your argument?

I would have to imagine that if iOS 5 were released in the past three weeks, either:
A. iOS would be stable enough that this app would work.
B. Apple wouldn't have approved the Google App because it doesn't work with iOS 5.

For people complaining, the idea of iOS 5's current status is for developers to work on their own apps with it. I'm sure Google is doing everything they can to make it work with iOS 5, including working directly with Apple, if necessary.

Yeah, it's an inconvenience to not have all apps work, but that's why Apple specifically tells you not to use your 'production' equipment with iOS 5. (Just as how the developer previews/betas of Mac OS X say not to use them on production systems.)

You agreed to the terms when you joined the developer program and installed preview/beta software.

What's that? You DIDN'T agree? You're NOT running it legally? Then stop bitching! Wait for iOS 5 to come out to the general public, and lo-and-behold, you'll find that there won't be these annoying incompatibilities. (And if you ARE a developer running it legitimately: 1. You shouldn't be talking about it on a public board, 2. You should know that Google (and possibly Apple) are working to resolve it. Stop bitching.)
Rating: 4 Votes
[ Read All Comments ]