While much was made of Microsoft's efforts to reenter the retail store market by going head-to-head with Apple, things have moved rather slowly for the PC software company, which has opened only eleven stores scattered around the United States over the past two years. 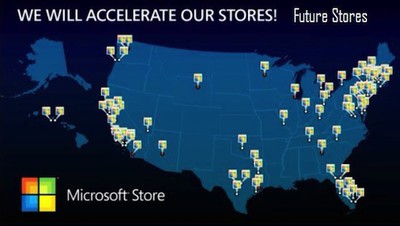 But Neowin reports that Microsoft today unveiled an acceleration of those plans at its Worldwide Partner Conference, targeting 75 new stores for opening over the next two to three years. The initiative will also include some international stores, mirroring Apple's own recent emphasis on international locations.

Apple has approximately 350 retail store locations and continues to open new stores on a regular basis, meaning that Apple will remain significantly in the lead in terms of total stores by the end of this push from Microsoft, but it is clear that Microsoft is making a significant commitment to the initiative after only dabbling in it for the past two years.

Microsoft has mimicked Apple's retail strategy of trying to create warm and inviting spaces prominently featuring wood surfaces throughout in order to draw in customers to interact with the products on display, while also including an "Answer Desk" very similar to Apple's Genius Bars for support purposes. The company has even worked to strategically place its locations in close proximity to Apple's stores in an attempt to target many of the same customers. And while Microsoft has to rely on hardware from its partners in order to show off its PC offerings, the company's new retail push seems indicate that it is intent on establishing a retail rivalry with Apple.

rsbagga
Will the stores work well for a few months, then slow down, and randomly stop working every few hours?
Score: 81 Votes (Like | Disagree)

Ichneumon
There are Microsoft Stores?
Score: 37 Votes (Like | Disagree)

JS77
Oh, Microsoft... You always manage to come across so... desperate
Score: 34 Votes (Like | Disagree)

Vol7ron
The answer bar. Please....They will just sit there and tell you that it is something wrong with the hardware and talk to the Manufacture. Apple's retail stores are a success because they sell what they make.

But hey, best of luck to them. Competition is only good!
Score: 32 Votes (Like | Disagree)

HarryKeogh
To enter you go in through the blue screen-door of death.
Score: 31 Votes (Like | Disagree)
Read All Comments

Friday July 30, 2021 9:04 am PDT by Sami Fathi
Tesla CEO Elon Musk reportedly once demanded that he be made Apple CEO in a brief discussion of a potential acquisition with Apple's current CEO, Tim Cook. The claim comes in a new book titled "Power Play: Tesla, Elon Musk and the Bet of the Century," as reviewed by The Los Angeles Times. According to the book, during a 2016 phone call between Musk and Cook that touched on the possibility of ...
Read Full Article • 178 comments