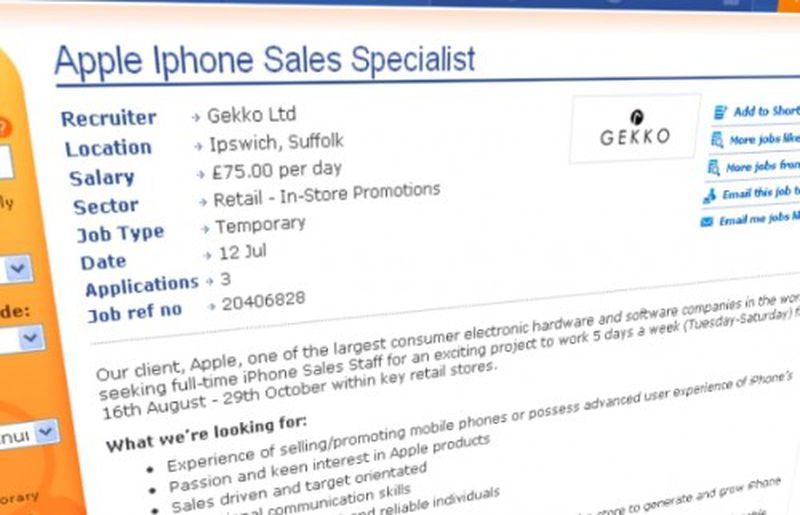 CNet UK reports that Apple UK seems to be increasing its retail store staffing for the period of August 16th to October 29th, 2011.

The post, which was sent to us by a tipster, asks for "full-time iPhone Sales Staff for an exciting project to work 5 days a week (Tuesday-Saturday) for the period 16th August - 29th October within key retail stores". The posting appears several times on Reed, with each post covering a different area of the UK.

The increased iPhone staffing, of course, triggers speculation that Apple may be launching a new iPhone during that time period. The window is fairly large spanning August through October, but coincides nicely with circulating rumors. Apple has been long rumored to be introducing the iPhone 5 in or around September.

The job listing was posted on July 12th and lists the Job Type as "temporary". The work involves selling/promiting mobile phones to generate and grow iPhone sales to ensure sales targets are met. A 4 day training event is required that dates from August 9th - 12th.

Onikoroshi
is the 75£ before or after the currency adjustment? ;)
Rating: 5 Votes

PeterSharp
I applied. They've just called me back. First- interview on the phone then face-to-face in London. I like Apple and working during iPhone 5 releasing will be interesting.
Rating: 3 Votes

Gekko is a field recruiting agency, They are not recruiting for temporary workers for Apple Retail stores they are recruiting for people to work within carrier stores such as orange stores and vodafone stores. Apple does not recruit any employee's through external agencies.

People applying for this position will be working as promotors inside selected stores around the country but will not be working with Apple's own Retail stores.
Rating: 3 Votes

coasterswim
Assuming two weeks between the announcement of the iPhone and release, and at least a week between invites and the announcement, that means we'd have to hear of the event by about two weeks from today.
Rating: 3 Votes

75 quid a day? I guess this store isn't aiming for true geniuses. :cool:

I was just thinking the same thing! Can you live on that?


The economy doesn't procude living wage jobs anymore. There's a thin tier of a professional an manegerial class and most everyone else is racing towards minimum wage. The 'middle of the road' white collar job is being phased out.

Plenty of people with a laundy list of qualifications and skills work for low wages. I don't know why so many people bother with being underemployed in McJobs, though. You could make the same money messing around on eBay. At least that way you have some freedom and don't have to deal with bosses or sour-faced members of the public.

Anyway, as others have said these are 'demonstrator' positions. A bit like the reps you see doing demos of mixers in electrical shops.
Rating: 1 Votes

leon44
Interesting...
I looked into it, it definately says the employer is Apple but it's a recruitment agency and I thought Apple did all its own recruitment.
Also, many of the locations advertised (random towns in the UK it seems) don't have Apple stores at all.
It's 5 days a week (Tuesday to Saturday) and you get £75 a day which is very decent...
Rating: 1 Votes

75 quid a day? I guess this store isn't aiming for true geniuses. :cool:


I was just thinking the same thing! Can you live on that?
Yes, you can.
Rating: 1 Votes

Rather than launching a new model, they're probably lowering the price of the existing iPhone to better compete with Android :p


That's really not Apple's way. They'd rather add something to make the iProd more compelling to buy, like iCloud makes you want to own a bunch of iProds so you can play with syncing them. A price war is the last thing Apple wants to start, it's so gauche. :)
Rating: 1 Votes