In its annual ranking of the largest retailers by U.S. sales, the National Retail Federation has pegged Apple in 21st place in 2010 with over $18 billion in sales between its retail and iTunes stores (via The Next Web). 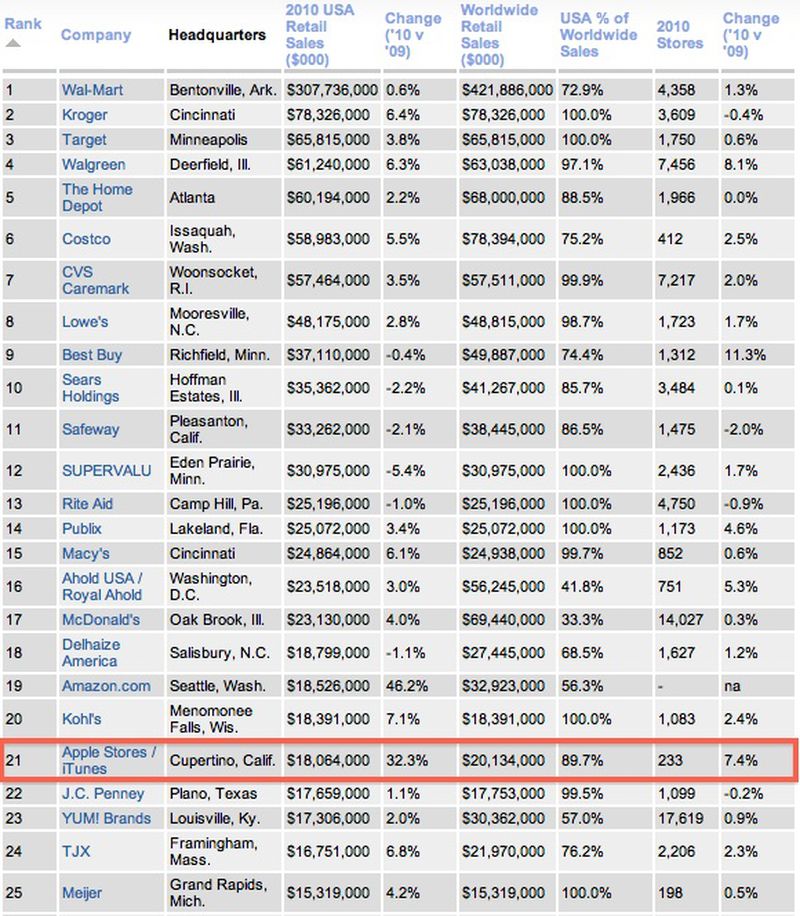 The National Retail Federation's 2009 rankings published last year had Apple in 53rd place with only a little over $6.5 billion in sales. Those numbers would put Apple's annual growth at 175% instead of 32.3%, and thus it is unclear if something has changed in the methodology of the rankings or if there is an error in the data for Apple.

Update: We have heard back from the National Retail Federation, which reports that the methodology for Apple has indeed changed between 2009 and 2010. The new numbers include iTunes Store sales and direct-to-consumer sales through apple.com, whereas the previous numbers had excluded those sales. Consequently, the 32.3% annual growth is calculated as if iTunes and apple.com sales had been included in the 2009 data.

deannnnn
Wow Publix is 14?! They're only in like 4 states!
Good for them, I love Publix. I hate shopping elsewhere when I'm in New York.
Rating: 3 Votes

Also interesting is how much Amazon is still growing year over year.
Rating: 3 Votes

Vol7ron
I can't believe that many people eat at McDonalds....ugh, their food is so disgusting....
Rating: 2 Votes

Actually, I think Costco beats Apple there, but certainly per square foot Apple is first!


The data is available on the linked source's web site. If you copy and paste it into a spreadsheet, add a column for worldwide sales per store (worldwide retails sales column / 2010 stores column), then sort by that column, you'll get your answer. Apple wasn't #1, but they're very close, and IKEA jumps from #89 based on sales amount to #1 when the list is sorted by sales per store.

Also, keep in mind that the worldwide retail sales column is in thousands, so don't forget to tack an extra three zeros on the end of the worldwide sales per store column.
Rating: 1 Votes

I'd go to WallofChinaMart, but don't want to be in the People of Walmart sites.

So your saying the crap in Target isn't made in China like every other retailer and your a fat slob?
Rating: 1 Votes

If you had the choice of buying the exact same household product in two different stores and then chose one that was significantly more expensive, you obviously value your ego more than your bank account.

Or you disagree with Walmart's business practices and choose 'vote w/your wallet' by shoping someplace else.

I bet Apple can be in the top 10 in couple of years or so. Just need drop their prices a bit lower.


I don't think that's ever going to happen, on the second point.
Rating: 1 Votes


Those are billions, not millions. 75k only justifies about two employees per retail location in either place.
Rating: 1 Votes

Whats really interesting people, is that Apple can achieve such place and high sales number with barely 233 stores... a more interesting approach would have been to see average sales by store... A quick view tells you Apple may very well be No 1 in terms of sales per location... just as they lead in this view almost every metric (revenue marketshare in mobile, laptops, etc...) In capitalism, thats whats ultimately important...


Actually, I think Costco beats Apple there, but certainly per square foot Apple is first!
Rating: 1 Votes
[ Read All Comments ]