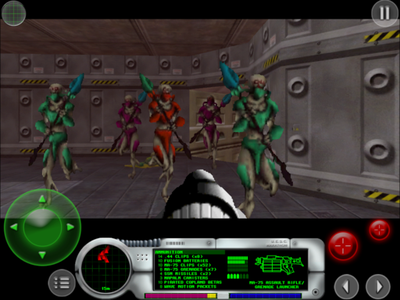 Early Beta screenshot
Bungie has posted on their official blog an interview with iOS developer Daniel Blezek who has been working on porting Marathon to the iPad. Blezek has been working on this project for some time but there were initially questions about the legal issue related to distributing Marathon's original level packs.

Based on notes from the interview, however, it seems that this is now a Bungie-sanctioned port.

For many, Marathon will invoke a wave of nostalgia; for others, this will be the first experience with the seminal Mac FPS. I hope all players appreciate Bungie's commitment to their fans. It's not every company who would support bringing a 16 year old game back to life!

Marathon is a first person shooter developed by Bungie Software for the Macintosh in 1994. It was a Mac exclusive launch and was released shortly after Doom first debuted for the PC. Bungie later went on to be acquired by Microsoft and released the popular Halo game series for the Xbox. Halo was originally developed for the Mac as well, but the release was delayed after Microsoft's acquisition.

The iPad version of the game has reportedly been submitted and will be released for free.

oh no more clutter on the app store ffs


I could say the same thing about your posts....:rolleyes:
Score: 10 Votes (Like | Disagree)

jowie
I remember me and my friend playing this game in a dark room with the sound through a big amp... When those aliens suddenly appeared behind us we used to scream like little girls :D

Mr_Brightside_@
All over the ship, dancing through the wreckage of the Pfhor computer core, DURANDAL WAS LAUGHING
this makes my sig so relevant
Score: 2 Votes (Like | Disagree)

IzzyJG99
If they were smart they would re-release it for the Mac via the App Store. Along with it's sequels which if I recall did have primitive and quite slow online play. I'd play the HELL outta that game.
Score: 2 Votes (Like | Disagree)

CFreymarc
If they get this out for iPad, I would love to see Oni get out. That was one game that was rushed out too fast. The surge in anime interest in the USA could really turn Oni into what it should have been in the first place.
Score: 2 Votes (Like | Disagree)
Read All Comments