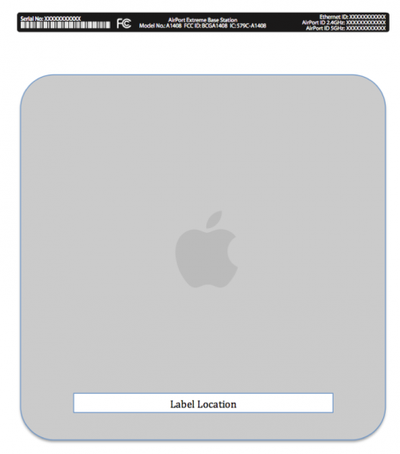 Engadget points to a newly published FCC filing that confirms that Apple is about to launch a new AirPort Extreme imminently.

The FCC just trumped Cupertino's plan to sneak out an updated AirPort Extreme wireless base station with the outing of an Apple 3x3 802.11n access point, model A1408.

There are reported to be 3 new devices: 1 AirPort Extreme and 2 Time Capsules (2TB and 3TB).

eldertong
Is it possible that the new AEBS has been staring us in the face for days?
Score: 7 Votes (Like | Disagree)

From what i remember Aluminium isn't a good material for an antenna.

who publishes stories after hours

Depends on where you are on this large sphere as to when "out of hours" occurs. :rolleyes:
Score: 3 Votes (Like | Disagree)

In the UK cable Internet Service Providers now supply nice hubs with the wireless, modem, and ports included which make the Airport redundant unless the new one has something special.

Yes, but in the UK the free hubs are absolute crap and hence I plug my crappy hub directly into my Airport. Many others do the same. Plus, the Airport has a USB port into which I can plug in my printer. The Airport never needs rebooting just to get online.


Please note I said NOW as both BT and VM have N hubs with integrated wireless, four [not three] ethernet ports, and the BT one boasts a USB port too. BT now brag about smart wireless technology that deals with interference on theirs.

Yeah that has been the case with US ISPs for a couple years now as well, but that still doesn't make the AirPort redundant because some of them don't come with 802.11n, and even fewer come with dual-band 5Ghz capability. There is always features that will be lacking though, especially with the dummy proof Time Machine wireless backup you can do with a Time Capsule. Plus the setup interface is a lot easier to manage than the firmware on other routers.


Again, the current model BT and VM are supplying are 802.11n and are plug and play from the off. The interface for those who want to tinker is both straight forward accessed from a browser and very flexible.

I do still use a 2007 AEBS but will only upgrade if the new model has significant advantages over and above the current hubs.

I don't put this post up for a battle, simply to add info relevant to the UK. :)
Score: 2 Votes (Like | Disagree)

In the UK cable Internet Service Providers now supply nice hubs with the wireless, modem, and ports included which make the Airport redundant unless the new one has something special.


Yes, but in the UK the free hubs are absolute crap and hence I plug my crappy hub directly into my Airport. Many others do the same. Plus, the Airport has a USB port into which I can plug in my printer. The Airport never needs rebooting just to get online.
Score: 2 Votes (Like | Disagree)