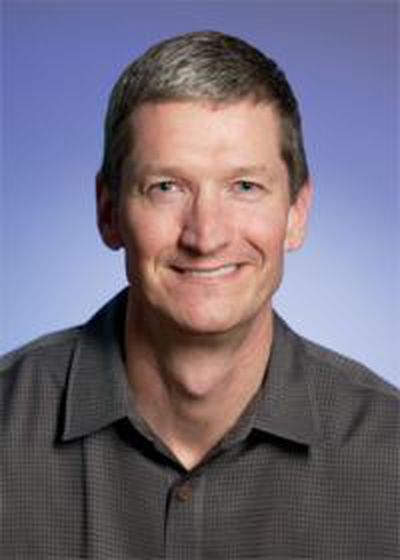 Apple Chief Operating Officer Tim Cook today participated in a Q&A session at the Goldman Sachs Technology & Internet Conference, and while he did not offer any major revelations, some of his comments offered a bit of perspective on Apple's business, including comments on the Apple TV, iPad sales channels, exclusive carrier relationships, and other topics. Here is a paraphrased summary of some of the key points:

Q: Where do you see things going with the Apple TV?
A: It's still a hobby, but our gut tells us there's something there. The go-to-market model is difficult, and we have no interest in being in the TV market. But we have continued to invest in the Apple TV and will keep doing so.

Q: Are all pieces of the iPhone OS platform complete or is there more to come?
A: The word "complete" isn't in our dictionary. We're always innovating and always looking to obsolete ourselves. The ecosystem and platform are really good, and the foundation is in place, but clearly it will continue to get better.

Q: How will you sell the iPad?
A: We'll start with Apple's direct channels, such as online, retail, education, etc. We'll also pursue indirect sales channels like Best Buy's store-in-a-store concepts. Internationally, we have a very good premium reseller program that we'll also use. Over time, sales channels will expand.

Q: What are the advantages and disadvantages of Apple's exclusive relationship with AT&T for iPhone and iPad?
A: Simplicity, and the ability to work with the carrier on new features such as visual voicemail on original iPhone. For multi-carrier models, in some countries, carriers have very "sticky" relationships with customers and thus a multi-carrier model greatly enhances potential sales. In Apple's top ten iPhone countries last year, five were single-carrier countries. Three were by contract, and two were by choice where we could add additional carriers at any time. In 2009, we added carriers in France, UK, Singapore, Scandinavian countries, Canada. In every single country, our units increased significantly. So we made really good decisions. But I'm not saying it would be the case in every country. We look at things on a country-by-country basis.

Q: Would other carriers have to match AT&T's pricing on the iPad service to even have a shot?
A: AT&T's pricing is truly revolutionary. But I wouldn't want to speculate on what someone else might have to do to join the party.

Q: Where do you see retail store expansion going?
A: Early on, we set a range of 25-50 new stores per year as our goal. We've been at the high end of that range and the low end, but we like that pace. In 2008, the world started to fall apart with the economy. We thought it would be better to slow down and wait for great properties to come on the market. That did happen, and we're ready to take advantage. We're turning the dial back up and will be near the high end of the range this year.

Q: Why did you launch your own processor for the iPad? What was missing?
A: Apple has for years been in the silicon design business. On PowerPC, Apple always personally crafted the northbridge and southbridge chipsets. It's not new to us. For the iPad, we felt we had the best knowledge of what we wanted the silicon to do and were in the best position to do it ourselves rather than going to someone else offering something that wasn't really exactly what we wanted. At the end of the day, we want to make the world's best products. By doing it ourselves, we were putting ourselves in the best position to do so.

Q: How would you describe your corporate acquisition strategy?
A: Technology and talent. Typically small companies. We've looked at big companies, but nothing has totally fit. If we find a large one, we won't be shy about it, but we won't do it to do it. We're not about having the highest market share or revenue...we want to make the best products. Acquiring a company simply to boost our revenue wouldn't be something we'd consider.

Q: Is there a chance of hubris creeping into the company?
A: People are our number one asset, and the executive team spends a lot of time thinking about recruiting and retaining great talent. We've said no to a lot of good products, great products even, in order to remain focused. That focus is so ingrained that the management team would never let hubris take hold. That's not what we're about. Focus on people and ensure that it's a small list of things to work on. That's the magic behind us.